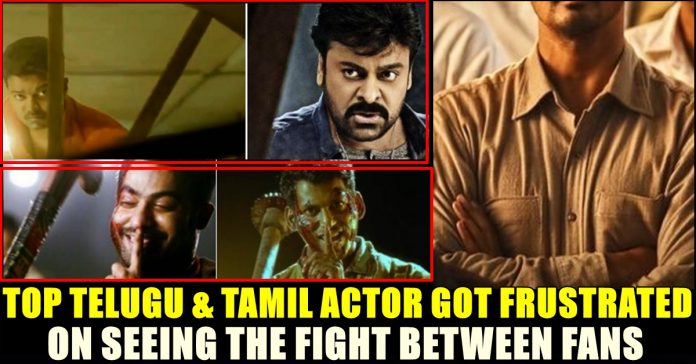 What started as a simple verbal spat between small groups of fans from two industries has now turned into a trending topic nationwide. Fans of Telugu film industry and Tamil film industry has started trending hashtags of Telugu real heroes and Unrivalled Tamil actors respectively. It all started when the fans of Tamil cinema expressed their disappointment over the first look of Dhanush’s Asuran remake “Narappa” which is going to have Venkatesh in the lead.

In earlier occasions, fans of both these regions got involved in such verbal spats but it didn’t trend India wide. The act of proving their favourite heroes is the best in the field has gone too far as we can see abuses and personal hatred has took place in their tweets.

Check out some of the reactions under the hashtags below :

our vijay devarakonda is enough for ur vijay

You Giys even Copy Our Leading Comedians Dressing Style!
No Comments!! #UnrivalledTamilActors pic.twitter.com/dZbM3uWBSU

These comparisons left actor Siddharth extremely frustrated. The actor who excelled in both the industries has found this kind of fight between youngsters as useless. To the 40 lakh followers he has in Twitter, Siddharth said that these youngsters has more to do with their lives rather than involving in such acts.

He wrote “Today’s #Paithyam challenge in South Indian fans clashing trends is #UnrivalledTamilActors vs #TeluguRealHeroes What a waste of the internet! Our country really needs these youngsters to do more with their lives, and their internet data!”

What a waste of the internet! Our country really needs these youngsters to do more with their lives, and their internet data!

However fans kept justifying their acts in the comments section of the actor’s tweet. It is high time for them to realize that praising their favourite actor and trying to prove them as the best in the cinema industry is taking them nowhere. What do you think on these tweets and the actor’s response to it ?? Comment your views below !!

Internet Users Spewed Hatred At Sid Sriram For The Way He Sings At His Concerts !! Singer Replied

On Monday evening, renowned singer Sid Sriram came up with a tweet in his official twitter handle, responding to the trolls that were made...

Senior journalist M Gunasekaran who was working in News 18 Channel, announced that he will be joining in Sun news on Friday. The channel...