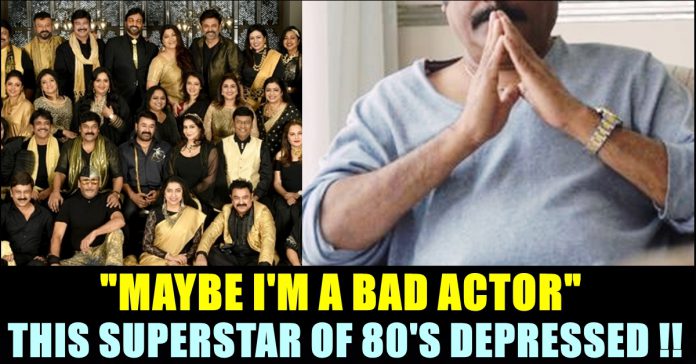 The grand event of the actors of 80’s reunion took place at Hyderabad and it was hosted by Telugu Superstar Chiranjeevi. Once in a year, stars from across the country would reunite in order to celebrate their friendship. The program took place in Chennai during 2017 and 18.

Now one of the most notable actors of the period between 80’s to 90’s, Prathap Pothen has expressed his grief on not getting an invite to attend the function. Pratap Pothen, is an Indian actor, director, writer, and producer who has acted in about 100 films. He has acted in Malayalam, Tamil and Telugu as well as in Hindi films. His directorial ventures were in Tamil, Malayalam and Telugu. The songs he got featured in, in his prime time such as “En Iniya Pon Nilave”, “Nenjil oru Mull” songs are still ruling the internet among youngsters.

In his facebook post, Prathop doubted that he might be a bad actor to get no invite from the Superstar. He even stated that his film career meant nothing and expressed his grief to the one and half lakh followers of his facebook account.

The facebook post of the actor read “i am a Persona Non Grata with the 80’s stars nayybe i am a bad actor and director …so they didnt invite me to their get together i am sad 🙁 what can one say ….only that my career in films ment nothing ….well some may like you some hate you …but life goess on”

Prathap is one of the main reason for the find of new talents in the new age Kollywood cinema. Through the “Naalaya Iyakkunar” show, which is a hunt for filmmakers in Tamil cinema, Prathap Pothen was appointed as one of the judge. He is one of the judges who recognised talents like Karthick Subbaraj, Vijay Sethupathi, Alphone Putharen, Bobby Simha and others. This Post Of Pratap Pothen About Karthick Subbaraj & Team Is Winning Hearts All Over !! Check Out !!

On seeing the facebook post of the actor, many of his followers consoled the actor not to worry and encouraged him by saying that he is one of a kind of an actor of his time. Check out some of their reactions below :

Previous articleParvathy Blamed Arjun Reddy In The Presence Of Vijay Devarakonda !! WATCH !!
Next articleBigg Boss Oviyaa Took Dig At Media For Questioning Her About Politics !!

Mohan G of "Draupathy" fame, on Friday, came up with a tweet demanding the arrest of youtubers Gurubaai and Sarvs Sagha after PUBG Madan...