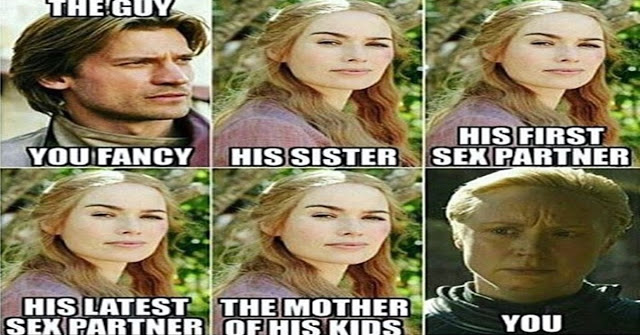 FIRE AND ICE AND
EVERYTHING NICEEEEE!!

GAME OF THRONES season 6 is less than 2 weeks away
and the fans are eagerly waiting to watch the episodes. The nerve cracking
suspense of what will happen to Jon
Snow, Tyrion Lannister, Sansa Stark and Daenerys would have already given
us sleepless nights. And not to forget what revenge Cersei would bring upon!
Having all
this hype and seriousness, I thought it would be a change to give you some of
the most hilarious memes made on GoT. There are a shit load if you surf the
net, but these would be my personal favourite!
If only Bran had told what happened..

When Tyrion is your favourite
character and without him there’s no GoT..

Ha Ha.. the common love scenario
picture for GoT..

I have never been happier about a
death before and couldn’t wait for Joffery to die a cruel death!

It’s Jon and not John..*rolling eyes*

And when you finally start liking a
character in GoT..and he goes *boom* in the next episode!

Oh..the fate of being friend-zoned.. the poor Jorah!

And you thought only guys can be
friend-zoned huh?!

Cersei and Jaime be the cutest incest
ever…bwhahaaa!

Dude..know what’s more painful by ‘being
cut off’..

GoT is full of surprises, isn’t it?
😉 And the shenanigans of ‘Little Finger’..

What do you do when you take a dump? Bolt
the damn door! Never ever forget that! Learn it from the Lannisters..

Cersei being jealous of Sansa. Yeah
right, like she got to live with her brothers at all!

No thanks..you can go hug your damn
self!

If this be the end (mind you, anything
can happen in GoT).. I won’t even know whether to hate the director or laugh my
ass off!! 😀