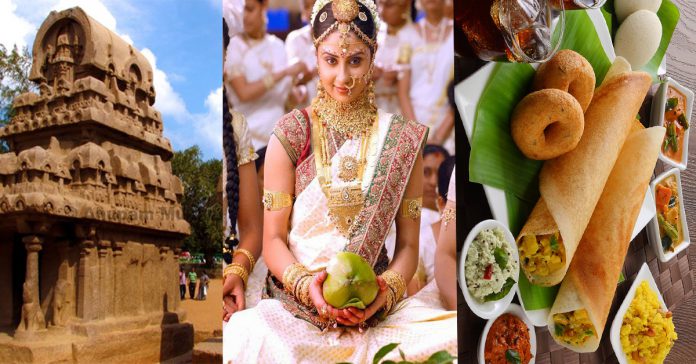 Top 10 Cultural Facts About South India That We Should Be Proud Of !!

The Dravidian tradition is immensely rich. It is believed that the South Indian culture is in spirit the celebration of the entire universe. What is fascinating about South Indian you ask? Well there is so much that a single article fails to do justice to the enigma that this peninsular region is for India. However, below is a humble attempt at seeing what the South Indian Culture is all about.

If you want to know about the tradition and culture of a society what better way than the festivals to find out the information from. South India like every other part of the country has many colorful and vibrant festivals. Onam and Pongal are some of the harvest festivals while Ugadi, Vishu, Mahashivaratri, Dussherah, Diwali, Christmas and Id are the other festivals which are celebrated in this part of the land.

The sculptures in the South Indian temples speak of the culture and tradition of this great peninsula.  Rich in history, these sculptures are a medium of expression which gives you a peek into their customs and way of life of these people. Infact, they are the safe keepers of history. You would also be surprised to note that the poses of these sculptures have actually helped in preserving south Indian dance forms as well.

The art at Mahabalipuram, Tanjore, Hampi and Madurai along with the mural paintings of Travancore and Lepakshi temples are living testaments to South India’s richness in the field of art. Being home to 5 out of the 26 World Heritage listed sites in India, South India’s connect to art is undisputable. A foray into the southern peninsula is certainly incomplete without a prevue of this fine aspect.

Whether it is the Tirupati Balaji Temple or the Meenakshi Temple; south India has some of the most exotic and beautiful shrines in the country. There are over 30000 ancient temples in the south and they have been there for over hundreds of years. The architecture and striking distinctiveness of these temples from those in the other parts of the country have captured the imagination of every traveler. These temples are in essence the windows to south India’s beautiful culture.

The key to a culture is through its literature and south India too is not an exception. The literary excellence of this region is at par with any other in the world, among the best! The origins of South Indian literature dates back to over two thousand years. The poetic Sangams were the first known literature of South India and today contemporary south Indian writers have won awards and accolades from all quarters.

The traditional silk and cotton sarees of the south are a favorite all around this country. The kanchipuram sarees are just one of the emblems of the beautiful sarees that women in this part of the country don.  The men traditionally wear a type of sarong which could be a white dhoti or a colourful lungi. The clothing and garments of a region are very much a part of its cultural identity and the same hold true for the south of this great country.

South India is known for a variety of dance forms which are immensely popular throughout the world. Bharatanatyam, Kathakali and Kuchipudi are just a few of these elaborate dance forms. These dances are a celebration of life and are embodiments of grace, purity and delightful poses. Without a doubt thus these dances are the bridges connecting the rich heritage of this part of India to the outside world.

A large part of the South Indian population belongs to the Shaivite and Vaishnavite branches of Hinduism. There is also a large Muslim community particularly in the Malabar Coast and Andhra Pradesh too. Christianity is another major religion down south. The fact to note here is that with people belonging to different religious schools of thoughts living together, south Indian culture has imbibed and is infact known for a largely tolerant and progressive attitude.

Carnatic Music is the Indian Classical music you associate with the four states of the southern Indian peninsula- Andhra Pradesh, Karnataka, Kerala, and Tamil Nadu. It is among the two main branches of Classical music in India. Carnatic music as a form developed around the 14th or 15th century and is mainly sung through compositions. Very much a part of the southern ethos, Carnatic Music is an indispensable segment of South India’s history and way of life.

You would have been forever deprived of the mouthwatering tastes of Dosa and Idli if it wasn’t for the culinary wealth of the south. Rice, Coconut oil, delicious pickles, spicy aromatic curries, delectable sea food, south Indian coffee, pongal, sambhar and vadai are just some of the luscious offering from the southern peninsula. The scrumptious Hyderabadi biryani is another illustrious addition to the list. South India’s cuisine is definitely an integral thread of its cultural uniqueness.

Courtesy : NABANITA DHAR : TOPYAPS.COM
Previous article23 Lesser Known Facts About Chennai That Will Amaze You !!
Next article10 Interesting Things You Can Do In Chennai With ₹ 500 In Your Pocket

Not many days ago, a Tamil actor got arrested for selling alcohol bottles illegally. Due to this lockdown, while people who belongs to red...