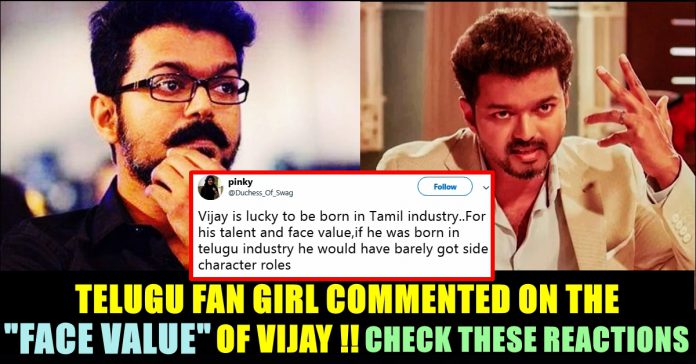 Fans of cinema industries having verbal spat with the fans of other film industry fans to prove their film industry actors as the best of all is not something new to social media. The spat often occurred between Kollywood and Tollywood fans as they have the highest number of actors with large number of fan followings.

Earlier a fight between Telugu and Tamil cinema fans occurred regarding who is the best dancer among Vijay and Junior NTR. Junior NTR Or Vijay ?? Fans Involved In Verbal Spat !! As the fight got elevated to next level, now a fan girl from Telugu film industry commented on the face value of actor Vijay. In her tweet the girl said that actor Vijay is lucky to be working in Tamilnadu. Further she added that for his acting skill and face value he will only get character roles in Telugu film industry.

“Vijay is lucky to be born in Tamil industry..For his talent and face value,if he was born in telugu industry he would have barely got side character roles” wrote the fan girl.

Vijay is lucky to be born in Tamil industry..For his talent and face value,if he was born in telugu industry he would have barely got side character roles

On seeing this tweet, many of the fans of actor Vijay who got irked trolled the actors of Telugu film industry. Check out some of their replies here :

Ok you wanted to be popular by defaming someone.Great.Enjoy the negative publicity mam. And yes Vijay is above all this hatred.He has faced more criticism and now is one of the faces of South Industry. You can either like him or hate him but can’t ignore him.
PS:Not a Vijay fan

As a fan of Thala, no other Telugu hero’s comes close to Vijay.. he is in different league right now even Ur state super star also..

Only Tamil industry has the best of talents in India.. There is no one in TFI to match our youngsters like Thalapathy Vijay or versatile actor Dhanush.. They both have come up against all odds.. Hard work & Talent matters. Your heroes have no guts to act in social message movies.

How can u even speak about face value when u have actors like jr ntr,Pawan Kalyan,chiranjeevi, ballaya,etc…😂😂😂 Grow up kid!! Without caste none can grow up in Telugu industry!! Its very rare😂😂😂… First clean the dirt in ur industry 🤣🤣

We Malayalis always respected Tamils n celebrating #Thalapathy than any other star in Kerala..
Same #Thalapathy is having a 20Cr+ market in ur state…
Show any star from ur state having 20Cr market in Tamil Nadu or Kerala.

Even To Seek Cheap Publicity, You Have To Use His Name. That's Where He Stands.

Vijay is very good actor and a brilliant entertainer, and about looks, he's looking better than most of Telugu biggies

Though it feels good to win such arguments, It is high time for the fans of actors to understand that every actors are talented in their respective way. The moment they stops involving in such verbal spats in social media, we might witness more socially responsible activities from them as it is the need of the hour. Comment your views !!