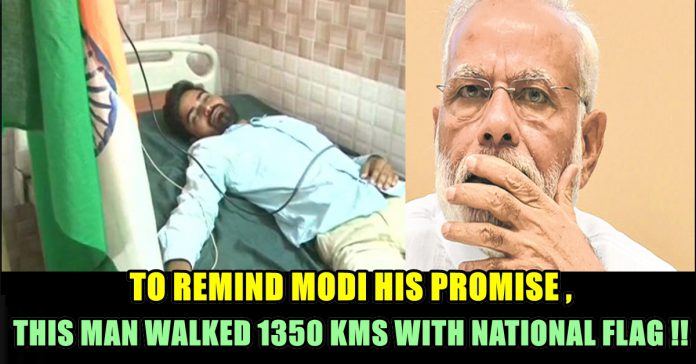 To Remind Narendra Modi Of His Promise , This Man Walked 1350 Kilometres !! : SHOCKING !!

Several years ago, prime minister Narendra Modi had made promises to the people of a village in Odisha. He assured the villagers of better medical facilities at Rourkela’s Ispat General Hospital, but reportedly the situation has remained the same.

Thirty-year-old Muktikanta Biswal, an idol-maker from Odisha’s Rourkela, said that the people are dying daily due to lack of proper medical care. Tired with the persisting situation, Biswal decided to walk to Delhi to remind Modi of his promise. He packed a bag with the necessary items and started his gruelling journey in April.

Biswal managed to cover 1,350 kilometers on foot before he fainted on a highway and was admitted to a hospital in Agra. He says that once he recovers, he will resume his journey to Delhi. “The people in my village are waiting for better medical facilities and infrastructure ever since PM Modi promised the same in 2015. I want to meet the Prime Minister to request him to fulfill his promise of completing the Brahmani bridge in Rourkela, and an upgrade of Ispat General Hospital to a super-specialty hospital,” Biswal told news agency ANI.

He added that there is a dearth of proper medical facilities and people are suffering due to lack of good healthcare. “Their plight compelled me to walk thousands of kilometres,” he said. So what keeps him motivated?

“The national flag inspires me, that’s why I carried it throughout my journey”, he told ANI.

WATCH : Reporter Questioned Yash For His Delay!! Here’s How He Reacted

Kannada actor Yash who is currently busy promoting his upcoming movie "KGF CHAPTER 2", faced an embarrassment after arriving late to the press meet...

Dhruv Vikram, son of maverick actor Vikram was supposed to make his acting debut with director Bala's Varmaa. However, it looks like his debut...