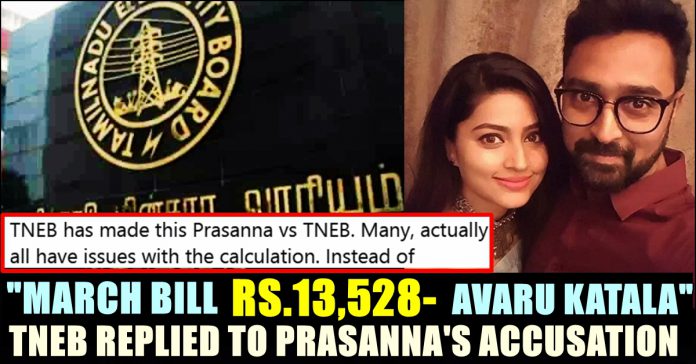 For the accusation made by actor Prasanna in Twitter, Tamil nadu electricity board has made a reply. They condemned the accusation made by the actor in public platform. According to Puthiya thalaimurai, TNEB has said that Prasanna didn’t pay his March month’s current bill Rs. 13, 528. It also reported that current bill is being updated only two months once and they also said that they couldn’t measure the amount due to this lockdown implemented due to Coronavirus.

Due to the coronavirus which killed more than three lakh seventy thousand people, the government has extended the lock down for the 4th consecutive time. The centre has announced that the lockdown will last till 31st of June. For past 2 months, people in country India are spending most of their time in their respective homes. The virus which was declared as a global pandemic by WHO, has affected the daily lives of human beings. People are forced to stay in house, result of which the usage of electricity is increased in large manner.

This lockdown situation has led the film stars to created awareness as well. Since the start of lockdown, cinema celebrities across the country are asking their followers not to roam around unnecessarily. On 2nd of June, Tuesday, actor Prasanna who is known for acting in films like Anjathe, Mafia has came forward to create awareness among his followers about the Tamilnadu Electricity board.

Taking to his official twitter account where the actor enjoys nearly 9 lakh followers, Prasanna accused the Tamilnadu electricity board for looting money from public using this COVID 19 lockdown situation. He posted a tweet asking “How many of you feel #TNEB is on a looting spree amidst this COVID lockdown?”

Many people along with Prasanna made similar complaints. Now, TNEB has came up with a reply to the “Mafia” actor. “Prasanna hasn’t paid the bill amount of Rs. 13, 526 which is meant for March month. His accusation is highly condemnable. Current bill is being updated only two months once. It is being measured by parting the four month electricity consumption into two. Due to Coronavirus lockdown, we couldn’t measure the electricity consumption in Prasanna’s house” said TNEB.

During the complete lockdown, members of Tamilnadu electricity board didn’t go to the houses of residents to note the reading. Instead they asked people to pay the bill amount of previous month. Now, after few relaxations, people are stating that authorities are forcing them to pay excess amount though they paid the bill for last month. Complaint regarding the same is being raised by several number of people. Few even said that the bill amount is high due to the large consumption of electricity for past two months.

Check out some of the reactions for this reply of TNEB to Prasanna :

TNEB has made this Prasanna vs TNEB. Many, actually all have issues with the calculation. Instead of addressing it in common, they are taking on an individual. Who cares what Prasanna house reading and charge is.

Ha ha ha ha now @Prasanna_actor also wants to jump into the bandwagon of politics appuram enna varungala prakasame prasanna poster adipom. All these rabble rousers need to live for 3 months in Mumbai, Bangalore or any city in Gujarat and then say about @tangedconews.

Comment your views on this reply of TNEB to Prasanna !!

Suicide of the student of Sathyabama college, has been the talk of the town. The unfortunate event has created a chaos among the students...

Shankar Shanmugam, is an Indian Tamil filmmaker who predominantly works in Tamil cinema. He made his debut as a director in the film Gentleman...