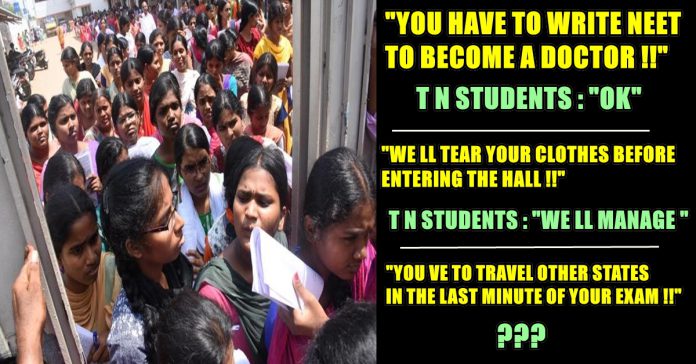 TN Students Forced to Travel 2751 KM To Write NEET Exam : Check What The Abandoned Students Has To Say !!

Hundreds of students from Tamil Nadu are busy booking train and bus tickets to neighbouring Kerala as the Supreme Court stayed a Madras High Court’s direction to the CBSE to set up additional centres for national eligibility-cum-entrance test (NEET) in the state.

Examination for the undergraduate medical courses will be held on May 6. The CBSE had earlier issued admit cards to Tamil Nadu students allocating then examination centres in states like Kerala, Karnataka and Rajasthan. Challenging the CBSE decision, a PIL was filed in the Madras High Court which directed the board to set up additional exam centres in the state to accommodate all the students from the state. The high court decision came as a ray of hope for these students, but the board moved the Supreme Court in the last minute, saying the exam centres cannot be changed in such a short notice.

Now, students are now left in a limbo. Reports say that about 1,500 students have been alloted seats in Kerala, Karnataka and Rajasthan. In the crucial, penultimate days leading to the NEET examinations, hundreds of aspirants from Tamil Nadu are now figuring out ways to reach their centres and hunting for accomodations. Parents are complaining that they are unable to get train tickets to reach the centres due to rush on account of the summer vacations. While staying the high court order, the top court also directed the CBSE to ensure that the same doesn’t happen from next year.

Some of the parents say they had already booked train tickets and hotel rooms in Kochi and other cities in Kerala. But they later cancelled it hoping that the CBSE would adhere to the Madras High Court order. The parents complain that they will now have to depend on bus or other private transport facilities as train tickets were not available due to the summer holidays. Students allege that many of the centres in Kochi are not in the city limit, but on the outskirts and are difficult to be located. They also worry that the last minute stress will affect their performance in the examination.

All said, the CBSE has to be blamed for this eleventh-hour NEET mess up.

Supreme court of India, you are asking 17 year old Tamilnadu school students to take NEET exams from places as far as Rajasthan. 2751 km away.

Are you sure, your honour? Do you want to take visa to enter TN tomorrow?

Abolish NEET for ever. That will be our only demand. pic.twitter.com/mgteTCtB26

I have no doubt whatsoever that the #NEET exam centers for TN students has been deliberately changed to avenge #TNAgainstNEET. Nobody will file an appeal to the SC when it’s already settled in HC. No other state’s students are going out of state except #TN. Our Time will Come!

The petitioner urged the state government to provide special buses for students who are appearing for NEET in other states free of cost. But the education minister said this could be done only from next year as there is no time for special arrangements now.

Bharati Sri, Tirunelveli student appearing for the NEET said it is devastating news, especially for the underprivileged students. “This is the most crucial time which demands all our concentration on the exam but now we have to worry about travelling to a different state,” she said. “Every year they come up with something or the other to make sure Tamil Nadu students aren’t performing at their best. I hope at least my juniors get a fair chance,” she added.

Another student, Ashwini, said: “I have to travel seven hours just to write an exam and it is only possible if I leave a day earlier. Now, I have to worry about the stay which should be preferably near my centre.” [wp_ad_camp_1]
“Initially they gave a choice to select the centre, but later they ignored all our preferences. Travel, transport, language, money are the things which are worrying me now and I couldn’t concentrate on studying. This process is especially harder for the underprivileged kids,” said Padmani Priya

Previous articleKarnataka Government Firmly Says That They Cannot Provide Cauvery Water To Tamilnadu : Check Out What The Water Source Minister Said !!
Next articleSHOCKING : Tata Tiago’s Remote Key Opens More Than One Car : Car Owner Fears How Many More Remote Keys Are Made To Open His Car !!