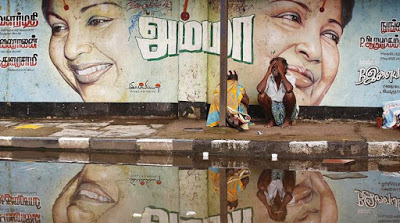 A flood-affected couple sits along a flooded roadside under a picture of Jayalalithaa, Chief Minister of Tamil Nadu, in Chennai.

Tamil Nadu government has asked the Urban Development Ministry to provide a special package of Rs 4,500 crore to take up restoration work in the urban local bodies severely affected due to last week’s torrential rains.
Union Urban Development Minister M Venkaiah Naidu, who is on a two-day visit to Chennai to get a first-hand account on the impact of floods, called on Chief Minister J Jayalalithaa at the Secretariat in Chennai.
Jayalalithaa drew his attention on the extensive damage caused to roads, drinking water, sewerage and storm water drainage systems in flood-affected urban local bodies, an official release said.
“The urban local bodies, including Chennai Corporation would require substantial assistance for restoration. Preliminary estimates of the requirement exceed Rs 4,500 crore”, Jayalalithaa was quoted as saying in the release.
Observing that the local bodies cannot rely on “own source of tax revenue” for taking up restoration work, she urged Naidu to grant a Rs 4,500 crore special package of assistance.
Jayalalithaa pointed out that the slum dwellers living on the city’s waterways in Adyar, Cooum, Buckingham Canal have lost homes and belongings in the floods.
“They are all currently housed in relief centres. Chief Minister emphasised that rehabilitating the slum dwellers is the highest priority of the government”, the release said.
Jayalalithaa said a special project to construct alternative housing for the 50,000 families who lost their houses, was being prepared that require a funding of Rs 5,000 crore.
She requested the Ministry of Housing and Urban Poverty Alleviation to provide financial assistance by way of special grant for the “massive” housing project as a special scheme considering the magnitude of the devastation.
For those families that have lost huts due to heavy rainfall, Jayalailthaa requested Naidu a special package of Rs 750 crore for construction of 50,000 tenements under the Central government’s ‘Housing for All’ scheme.
The Chief Minister requested Naidu for speedy approval of the Rs 3,770 crore Metrorail Phase-I project running from Washernment to Thiruvottiyur.
Naidu in his response said the project was approved by the Ministry of Urban Development and has been sent to Public Investment Board in the Finance Ministry seeking its “clearance”.
He assured all support from the Centre to the people of Chennai in this need of the hour.

Previous articleStarted In Paris,Now #ShareForChennai Spreads To Coimbatore,Canada,China,Dubai,England!
Next articleA Smartphone With 15 Days Worth Of Battery Life? Take Our Money Already!