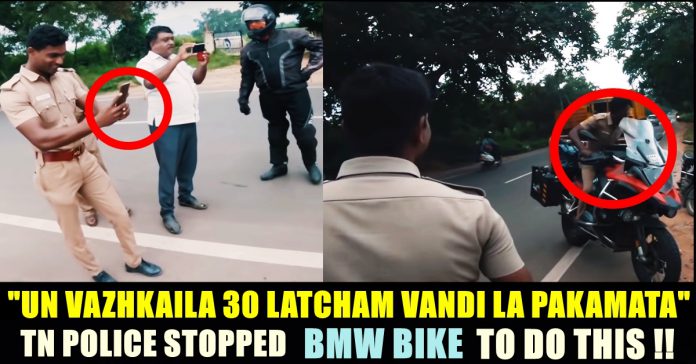 Video of Tamilnadu police officers stopping a BMW super bike to take pictures with it raised the eyebrows of the netizens. The video surfaced in the youtube channel name as Ride with KC which is owned by the biker who got stopped by the cops. The entire incident captured in his helmet camera and is being shared by many in Internet.

The rider was travelling from Mumbai to Madurai to experience some adventure it seems. As of 2012, BMW’s R1200GS bikes are their top-selling models an it officially started operating in India on 2018. According to sources the bike’s worth is 22 lakh rupees in Indian market. The cops who stopped the rider, initially asked him to produce the documents which was showed by him through his cell phone. After confirming that every documents are perfect, the cops started admiring the super bike as such vehicles are rare to be seen in roads.

Not only cops, even few public people who are travelling through that highway stopped their vehicle and started observing the vehicle. When the rider was asked how much the bike’s worth is, the rider can be heard saying “30 lakhs”. After hearing the price, the cops who are around started gazing at the bike with wide laugh in their face.

While checking his Insurance details, one of a cop asked his colleague to take a picture of the bike. “Can I take one photo, if you don’t mind” asked one of a cop to the rider to which he answered by saying “no problem”. However the other cop hesitated to take a picture along with the bike to which the first cop said “Hey can you able to witness a 30 lakh worth bike in your entire life ?? Come here, I will take one for myself” ater which the photo session took place in the highway. When one of a cop asked about the mileage details of the bike, the rider said that it gives 15 kilometres of mileage.

After this video got uploaded in youtube, many people started reacting in several ways whereas one of a guy said “It’s really good to see cops for the first time not asking for bribes after seeing such a cool ride.” to which the rider who uploaded the video replied by saying “yeah they were very nice to me”

Through the replies we came to know that the rider is heading to Madurai to halt in BMW service centre in order to visit Rameshwaram. Comment your views on this activity of the cops who are passionate about bikes !!

Previous articleHip Hop Aadhi Called Host As “Aunty” On Air !! WATCH !!
Next article“I Know How To Make A Gangster Film Or A Don Film” -Atlee

After Rajinikanth's tweet on "Karuppar Kootam" issue surfaced, several reactions are pouring in Internet platforms from every direction. A hashtag saying “கந்தனுக்கு_அரோகரா” is...

Celebrities conducting chat session through their official social media accounts to interact with their fans and followers is common nowadays. Amidst the pandemic situation...