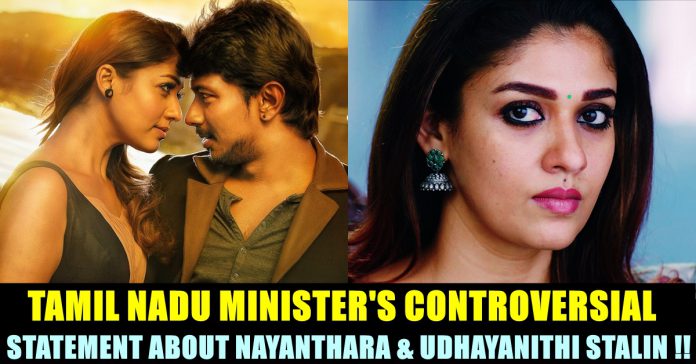 K.T Rajendra Balaji, a prominent member of Anna Dravida Munnetra Kazhagam and the present minister of Tamil nadu’s Milk and Dairy Development, made a controversial statement against DMK’s Udhayanithi Stalin Stalin and actress Nayanthara. In a recent speech he gave to his party members, Rajendra Balaji said that Nayanthara is planning to file a complaint against Udhayanithi Stalin.

Nayanthara who is fondly called as “Lady Superstar” by her fans, proved herself as one of the brilliant actresses in Indian cinema right now by choosing scripts such as Aramm, Kolamavu Kokila, Imaikkaa Nodigal etc. At the age of 36, we could even declare that no other actress in Tamil cinema history has paired up with top-tier actors such as Rajinikanth, Vijay, Ajith and with newcomers such as Vijay Sethupathi, Sivakarthikeyan, Nivin Pauly etc like Nayanthara did.

The actress’s personal life has always been under scanner among media portals. She who is currently involved in a romantic relationship with director Vignesh shivan, often caught in controversy in the past for the relationships she had with actors Simbu and Prabhudeva. Earlier, minister Jayakumar of ADMK party, while criticizing the DMK’s strategy of adding members to their party, said that Nayanthara is a family member of DMK and added that she has a close relationship with someone in the family.

Now, Minister Rajendra Balaji had made a statement saying that a big issue is going to take place as Nayanthara is going to make a complaint against Udhayanithi stalin. “If she makes a complaint, then he will be arrested under POCSO act” he said.

“I am not saying it for the sake of it. Nayanthara, on her birthday, disclosed about it to the people who belongs to her close circle.” said Rajendra balaji. “When they asked why she is making a complaint against him, Nayanthara said that she will expose the details through her complaint. I don’t know what could be the problem. But if she makes the complaint, then he will be arrested under POCSO” he said.

Further he kept tarnishing the prominent members of DMK party. “She (Nayanthara) came from Kerala and earning money by acting in films. Why you people are torturing her ??” he questioned the DMK party members. He also criticized the DMK party by saying that they are leading a “Family politics”. Balaji is very well known for his bold and defaming comments against DMK party and opposition leader MK stalin.

Nayanthara and Udhayanithi Stalin were acted in a number of films together. Nayanthara was first appeared in Udhay’s production venture “Aadhavan”. The actor reportedly tried committing Nayanthara in his debut film “Oru Kal Oru Kannadi” but the actress turned down the opportunity. After that she acted with him in “Ithu Kathirvelan Kaadhal” and “Nanbenda”. In 2017, according to a Times of India report, a rumour surfaced saying that Udhayanithi tried committing suicide after an alleged relationship with Nayanthara went sour.

However, Udhayanithi’s wife bashed the rumours tweeting “”Its journalism of the lowest form..pls dnt waste ur time or mine askin me if its true!”