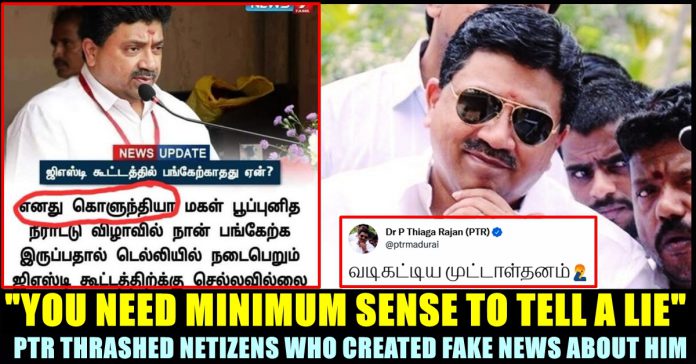 Tamil nadu Finance minister Palanivel Thiagarajan who is pretty much active in the micro blogging social media site, reacted to the fake allegations that were made against him for not attending the GST council meeting. The minister, earlier, clarified to the media saying that he did not participate in the meet that took place in Lucknow due to the prior commitments in the constituency and said that nothing important would be discussed in the meet, as per the agenda has been sent to the states initially.

However, fake reports started emerging in social media platforms alleging that the minister skipped the meeting due to a function that took place for the daughter of his brother’s wife. Dr.Palanivel Thiaga Rajan who never shied away from shutting down such baseless trolls, replied to the fake allegation and his reply is going viral among the users of Twitter.

“This is utter non sense. The meeting took place in Lucknow, not in Delhi. I don’t have a brother’s wife and how could a function would take place for someone who doesn’t exist ?? Even to tell a lie, a minimum sense in needed, you cow urine drinking idiot . . !!” the finance minister said in his reply.

PTR went on to reply to self proclaimed political analyst Sumanth Raman who believed one of the fake allegations and agreed to the one who said that the treatment from media would have been different if similar statement was made by H.Raja, Dindigul Srinivaasan or Sellur Raju. The twitter user quoted a fake statement and denoted that PTR didn’t attend the meeting due to a baby shower function that he had to attend and Sumanth Raman replied to him, writing “Of course. No doubt about that.”

Reacting to Sumanth Raman’s reply, PTR, in one his tweets, wrote “Dude…..have you sunk so low in you desperate and pathetic search for relevance that you’re responding to hypothetical statements based on outright lies from faceless accounts? I can recommend a good psychiatrist for you……and hope you get well soon…” by quoting Sumanth’s tweet.

Dude…..have you sunk so low in you desperate and pathetic search for relevance that you’re responding to hypothetical statements based on outright lies from faceless accounts?

I can recommend a good psychiatrist for you……and hope you get well soon… https://t.co/z3jhdHAan8

PTR, while he was asked on why he skipped the meeting, said to media that he had received the invitation for the meeting only after 10th of September and that he had committed to participate in many events that took place in Madurai city. He also stated that he informed Chief minister MK Stalin about it.

“As per initial agenda sent to the states, nothing had seemed important” said PTR by adding that Finance secretary and Commissioner for Commercial taxes would attend it on his behalf.

Previous articleAravind SA Replies To The Double Marriage Proposal!!
Next articleSwiggy / Zomato Boys Not Allowed To Use Lifts In This Building!! Check How Public Reacted!!

Video of a group of youths involving in violence in front of Madurai Meenakshi college and attacking a father of one of the students,...