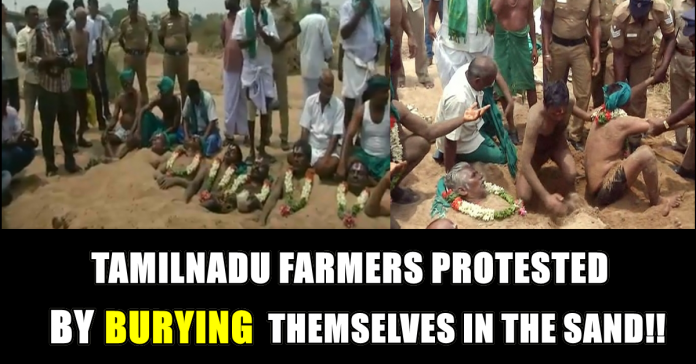 Earlier our farmers had camped outside the Jantar Mantar in Delhi to press their demands in a unique manner. They had shaved their heads, moustaches; clasped mice and snakes in their mouths; staged mock funerals and flogged themselves. They even carried skulls of farmers who committed suicide due to debt pressure and threatened to drink their own urine.

Continuing their protest for immediate setting up of the Cauvery Management Board (CMB), as directed by the Supreme Court, a group of farmers in Tamil Nadu’s Trichy partially buried themselves in the sand on the banks of Cauvery river. Carrying skulls and garlands around their necks, the farmers battled the blazing sun as they enveloped themselves in the hot sand. The police detained P Ayyakannu, who became the face of farmers protest in Delhi last year, and other protesting farmers. 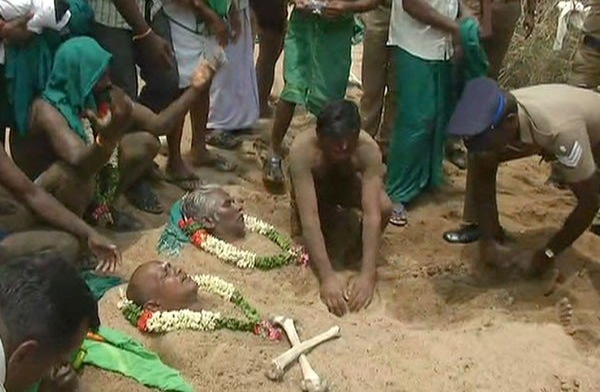 The farmers have been vociferously demanding the formation of the board. They buried themselves in the sand on the banks of the Cauvery river.  In a recent meeting, the farmers’ representatives had urged the State government to file a contempt petition before the apex court if the Centre failed to comply with the February 16 order. The protest was led by farmer leader Ayyakannu. Calling the judgement historic, the farmer leader PR Pandian had said: “In a way, this is a historical judgment where the apex court has said no state can claim ownership over a river. The Central government should now nationalise the rivers.”

Political parties have joined farmer associations in Tamil Nadu to demand constitution of the board to protect their interests, but Karnataka doesn’t seem to be on the same page with its neighbour. 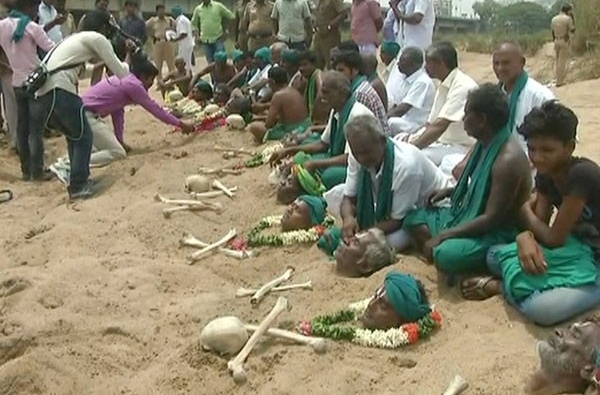 Tamil Nadu’s main opposition party – the DMK – along with the Congress, CPI(M) and CPI held a day-long bandh in the state yesterday. They have been accusing the central government of delaying the setting up of the board in the wake of the upcoming Assembly election in Karnataka next month.

Earlier this week, the ruling All India Anna Dravida Munnetra Kazhagam (AIADMK) began their hunger strike across Tamil Nadu to pressurise the Centre to form a Cauvery Management Board. 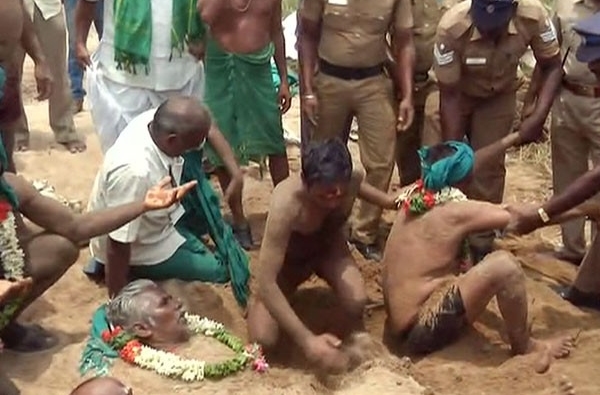 On 16 February, the Supreme Court asked the Centre to form the CMB to implement a formula for sharing of water between Tamil Nadu and Karnataka. In the ruling, the top court reduced Tamil Nadu’s share in the Cauvery water to 177.25 thousand million cubic feet.

The top court will hear the petition on April 9. “We understand Tamil Nadu’s problem. We will see that Tamil Nadu gets water, and will solve the issue,” a bench headed by Chief Justice of India Deepak Mishra said.