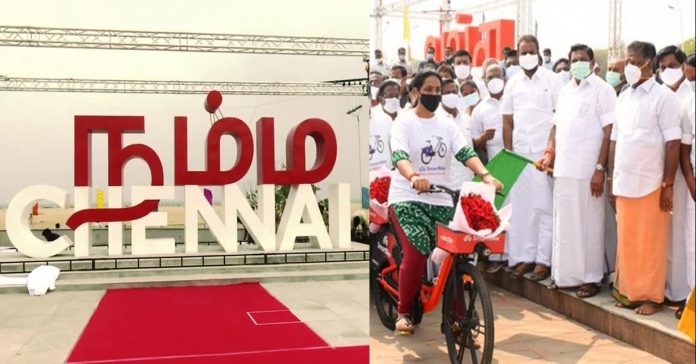 As a part of a Greater Chennai Corporation initiative, Tamil Nadu Chief minister Edappadi K Pazhaniswamy launched a total of 1000 smart bikes and next generation bikes on Thursday. The bikes will be added to the existing fleet and of 500 bicycles in 78 docking stations.

It is reported that the bikes were ready even before the COVID 19 outbreak but couldn’t be launched due to the lockdown restrictions. “We were waiting to launch them here first, but launched them in Chandigarh last December” said Darmin Dontamsetti, managing director of Smart bike mobility. Once the battery powered bikes gets fully charged, it could run of 45 kilometres, says reports. It is also could be pedaled, reports added.

Dharmin, further said that the studies in countries such as US has discovered that a commuter can reach a destination faster on these bikes than on a two wheeler or car during peak hours. He also assured that the tyres won’t get punctured and the chain won’t break.

Ranjit Srivasthava, vice president of marketing and operations, Smart bike, has said that the next generation bikes are shaft driven and doesn’t contain chains which means that it doesn’t require maintenance. They are light because of the magnesium alloy wheels and punctures won’t be a worry due to the tubeless tyres.

The Chief minister also inaugurated the “Namma Chennai” selfie point, off Kamarajar Salai, Marina beach. The 10 feet tall typography is made of a budget Rs.28 Lakhs and it consists “Namma” in Tamil and “Chennai” in English which means “Our Chennai”.

Samantha Slammed “Arjun Reddy” Director For His Comment On “LOVE” !! Got Extremely Trolled Back !!

Samantha, a Tamilnadu born actress who married to Telugu super star Naga Chaithanya expressed her view on Arjun Reddy film director's one of the...