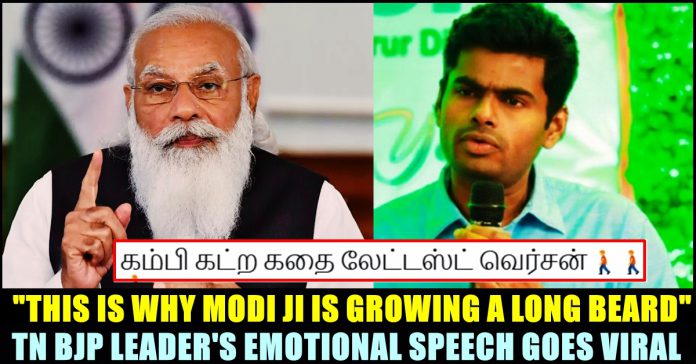 Tamil nadu BJP leader Annamalai IPS who recently grabbed headlines after being called as “Chinna Sanghi” by Senthil Vel, one of the administrators of Bharatiya Janata Party, in a public meeting, once again gained the attention of Internet users after making a brief explanation on the long beard of Prime minister Narendra Modi. He said that the former Gujarat chief minister is expressing his grief through his beard for the sufferings of people who belong to country India due to the COVID 19 pandemic.

Recently, 37 year old Former Indian Police Service officer K Annamalai was appointed as the new BJP chief of Tamil Nadu, succeeding L Murugan who was inducted into the Union cabinet. Annamalai was Deputy Commissioner of Police (Bengaluru South) in 2019 when the 2011 batch IPS quit the civil services. By then, he was already known as Karnataka’s ‘Singham’, a term that is used to mention a tough cop. K Annamalai had hit the headlines for his role in tackling the 2017 riots in Karnataka’s Chikmagalur and there were protests in the district when he was eventually transferred out.

It was reported that the BJP party hopes that the 37-year-old will draw in more youngsters ahead of the local body elections slated later in the year. Since 2019, he is the third leader to take charge of the BJP’s top post in Tamil Nadu. The young politician has been attending meetings and addressing the cadres of his party after becoming the leader for BJP in Tamil nadu. In a recent meeting, Annamalai talked about why Narendra Modi is growing a long beard and his speech became a subject to online trolls and criticisms.

“Only to express his pain, he has been growing the beard. You all must understand. Thousands of people in India are waiting to trim his beard. But why he is growing his beard that long ? He addressed us last evening and his looks left me dejected.” said Annamalai and showed the banner of Narendra that was planted for the meeting and asked “Look at the Modi ji in this picture and think how he appeared last evening” Annamalai said.

“For what ? He is conveying a message to us through his long beard. He is saying that he suffers the exact same pain of each and every Indian going through amidst this COVID 19 pandemic situation. That is the only reason for his long beard. nothing else” Annamalai could be seen saying. Watch the video below :

Dear Tamilians
Please translate his speech.
He is telling something about modi beard🤔 pic.twitter.com/c3DoficvRa

As soon as the video got surfaced in Internet, it became a subject to severe online trolling and criticisms. Check out some of the reactions below :

I see that this is taken in a comical sense.

I am livid beyond words. This video is the best exhibit of how badly, lowly BJP thinks of the intelligence of ppl.

The speaker is the TN BJP president and says Modi is keeping beard because he is sad on the COVID suffering of ppl 🥵 https://t.co/lf3cUdCusa

Actor Maran who is known among audience for appearing in Tamil films as a supporting actor, died of COVID 19 virus on Wednesday morning....

Virender Sehwag said MS Dhoni got away lightly after he lashed out at the umpires over a no-ball controversy during Chennai Super Kings' thrilling...