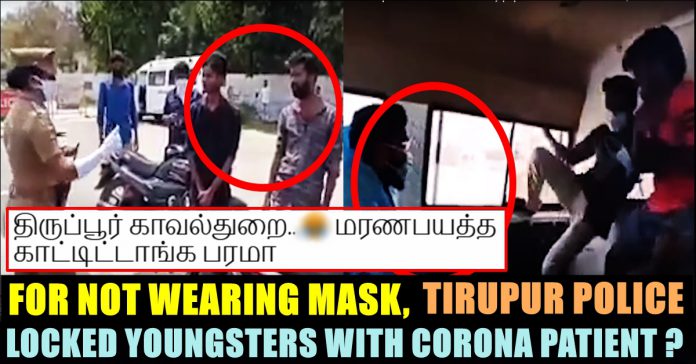 Not many days ago, a drone video of a group of boys who were playing carrom board running away from the camera went extremely viral across the social media platforms. The video which was recorded by Tirupur police, showed a guy hiding himself by using his carrom board to avoid getting caught in the camera. The video was widely shared with hilarious captions and reactions. It became a meme material which caused several number of video and photo memes. Now, the police officers of Thirupur district came up with another awareness video which is also going viral in social media platforms.

In this video, we can see three boys without helmet and mask going somewhere in one bike. When Police officers questioned, the boys can be seen saying something as reason. To make them realize what happens if they roam without wearing mask, Tiruppur police officers forced them to enter an ambulance in which a fake corona patient was seen lying. The way the boys trying to get out of the ambulance in the fear of getting affected by Corona has been recorded by the police officers to create awareness.

“The boys you saw in the video was roaming when we were seeing our duty. When we asked where is their mask, they said that it is somewhere else. To make them realize the importance of mask, we locked them in ambulance with corona patient. Only after seeing the patient, them came to know about the seriousness of the virus. You don’t know who contains the virus while you are roaming outside. So please don’t come out of the house at any situation. While coming out for necessary reasons, one must wear mask” said the police officer who said that the man inside the ambulance was not an actual corona patient. “He is a general person who came to act as a Corona patient. He doesn’t contain coronavirus” Police officer added.

The video is being widely shared by the netizens. Check out some of their reactions below :

Psychological torture is not fun https://t.co/4taVq5m9nH

However, few people expressed their disagreement with this kind of treatment to the youngsters. They accused the police officers for torturing the riders mentally. The entire world is in lockdown since last one month due to the coronavirus outbreak which killed nearly 2 lakh people around the world. India showed more than 20,000 positive cases and 686 people died due to this deadly virus. To avoid community spread in the country, citizens of the country are forced to stay in home.

Previous articleLockdown To Continue ?? Here’s What Could Happen To Earth !!
Next articleRajinikanth Fan Killed Vijay Fan During Verbal Spat !!