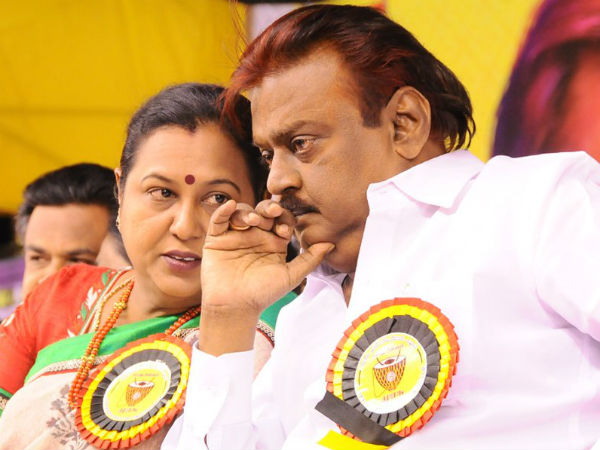 Tirupur Court Issues Arrest Warrant Against Vijayakanth And His Wife.. The Reason Behind Is Something Hilarious!

manisharajavel
July 29, 2016
Share
Facebook
Twitter
Pinterest
WhatsApp
The last film he acted in was released years ago, but Opposition leader Vijayakanth has never ceased to be a performer. Even as he hogged the limelight due to the performance of his party in the hustings, he garnered equal or more attention over the controversies he created along the way.

During December he allegedly spat at reporters who had gathered around him. Vijayakanth was ticked off when a reporter asked him questions on AIADMK returning to power in the coming election. After replying sarcastically, he spat in disgust charging the media of not being courageous enough to raise similar questions to Chief Minister J Jayalalithaa. This led to protests before his residence in Chennai, which ended in a fracas between journalists and his party men. It is this case that has now reached the High Court of Madras, which on Friday asked the city police to inquire into the complaint against him.

Public Prosecutor K N Subramaniam had filed the case against Vijayakanth and Premalatha for allegedly making defamatory remarks against Chief Minister Jayalalithaa at a public meeting in Palladam on November 6, 2015.

Even after issuing so many calls, both of them failed to report to the court’s hearing for a defamation case filed against them.

A court in nearby Tirupur today issued arrest warrants against DMDK leader Vijayakanth and his wife Premalatha after they repeatedly failed to appear before it.
Principal District Judge Alamelu Natarajan ordered the arrest warrants against the two as they failed to appear before the court for the past three hearings and did not turn up on Tuesday also.
Previous articleTop 15 Street Food Places In Bangalore That Offers Yummy Mouth Watering Food!
Next articleBengaluru Battles Flood in Many Areas

Due to the passengers who belong to north part of the country, a Howrah to Kanyakumari Express train got delayed at Chengalpattu for one...

A second year visual communication student named Dhana Rakshana committed suicide after falling in love with a popular youtuber who identifies himself as "Prank...