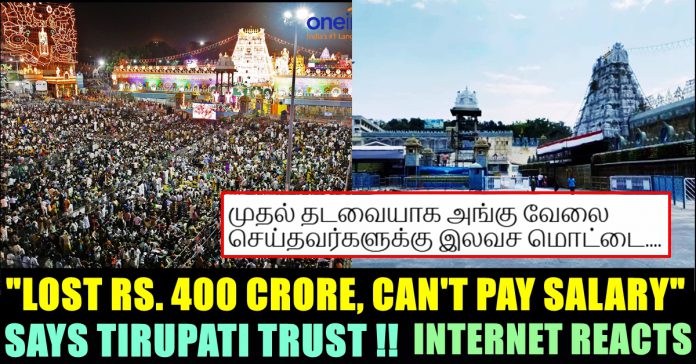 On Sunday, The world’s richest temple trust Tirumala Tirupati Devasthanams has said that it can’t pay salaries and meet daily expenses due to the lockdown crisis. The trust oversees the operations and finances of the Tirumala Venkateshwara Temple, the most visited religious center in the world. It is also involved in various social, religious, literary and educational activities. TTD is headquartered at Tirupati and employs about 16,000 people.

According to Time of India, the authorities of the temple said that it lost Rs.400 crore of revenue due to the lockdown crisis and does not have enough money to pay salaries and to meet daily expenses. The temple closed Darshan for nearly two months and the revenues of the temple have hit the rock bottom it seems. Due to the shut down, the temple which attracted 80,000 to 1,00,000 devotees per day, has not seen a single devotee for the past 50+ days.

The reports suggests that the trust has already spend Rs.300 crores on paying salaries, pensions and other fixed expenses. Now the trust authorities are finding ways to resolve the financial crisis “without touching the 8 tonnes of gold reserve” and Rs.14,000 crore of fixed deposits.

Usually, the TTD trust would receive Rs.200-220 crore of revenue per month while post lockdown, the temple has raised no revenue as it is closed to devotees. However, the daily, weekly rituals are being conducted as per the prescribed agamas, despite of no pilgrims.

With salaries and other expenses for 20120-21 pegged at Rs. 1385.09 crore, the TTD has to shell out approximately Rs.120 Crore towards it every month even during lockdown. It is also notable that TTD has to extend financial support in the form of grants of near 400 crore to SVIMS, BIRRD and other healthcare institutions of it.

A reports suggests that the authorities of TTD has said the trust has the reserves to pay salaries to its employees for May month. Y.S Subba Reddy, Chairman of TTD has ruled out the options of drawing money from the fixed deposits or gold deposits in the bank.

“That will not happen. Our chief minister Y.S Jagan Mohan Reddy has given instructions that we should not touch deposits because it is a sentimental issue. Gold and fixed deposits are given by devotees from all over the world. That is sentimental. Only Hundis and other collections should go to corpus” he said.

As soon as the news surfaced, users of social media started reacting to it in various ways. Many insisted on the trust to make sure people are getting money for their survival no matter what it takes. “Whatever the money you have, came directly from people. Whats the purpose of the gold sitting ideally without serving the people who protected the temple ? Sell a portion and pay all !! Tirupathi balaji will be proud !!” wrote Tamil movie reviewer Prashanth.

Check out some of such reactions :

Whatever the money you have, came directly from people. Whats the purpose of the gold sitting ideally without serving the people who protected the temple ? Sell a portion and pay all !! Tirupathi balaji will be proud !! pic.twitter.com/mwZM82A7XA

Tirupati is having a first world problem. 15k cr in FD and 8 tonnes of gold. But can’t pay employees because an anthropomorphic god needs its halls cleaned.

as per puranas this ain't the first time …

Previous article“I’m Ready To Reduce 70% Of My Salary” – Young Hero Announced !! WATCH
Next articleCSK’s Terrific Reply To A Fan On Watson’s Innings In 2019 Finals !!

Kamal Haasan's recently released "Vikram" is running successfully in theatres beyond 25 days since its release. Choosing Lokesh Kanagaraj to direct the film, became...

“No Recognition For Us” Man Who Worked In Many Top Films Slammed Award Functions !!