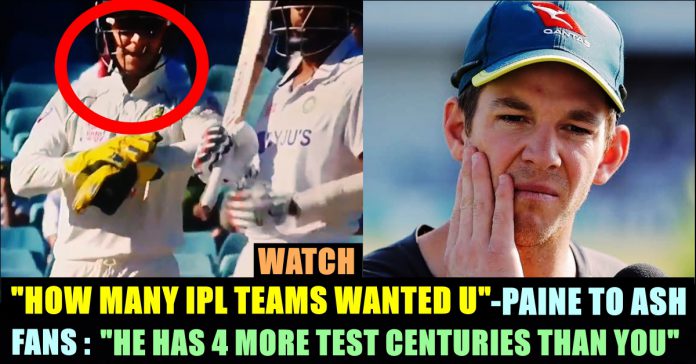 A little bit of banter between the players of two teams in a test match is not some new in cricket. However, fans who watched the match today, felt that it went too far beyond the limit as the Australian captain used cuss words against Ravichandran Ashwin while he was batting in the fourth innings of the third test cricket which took place at Sydney.

Vihari and Shwin suffered injuries during the course of their innings but held the fort bravely. They were required medical attention and needed breaks in between. At one point, Tim Paine, captain of the Australian cricket team got visibly frustrated and yelled at the two Indian players while Ashwin was adjusting his chest pad.

Further Paine used cuss word and abused the Tamil nadu cricketer by saying “At least my teammates like me di*& head”. He also asked “How many IPL teams wanted you when you asked every single one of them?” to Ashwin and kept distracting him.

Paine; How many IPL teams wanted you when you asked every single one of them?

I *think* Paine then launches into a bad Indian accent?!? pic.twitter.com/giIBLqeraK

This behaviour of the Australian captain didn’t go well with the fans of cricket. They started expressing their disapproval over his activities by slamming him in social media platforms. “Tim Paine is talking an awful lot of shit to a bowler who has 4 more test centuries than he does lol ” wrote a fan whereas another one said “God you cant rattle ash mentally!! He stood his ground against the world during mankad”

God you cant rattle ash mentally!! He stood his ground against the world during mankad

Tim Paine seems to be better at sledges than edges.

Tim Paine, the bowler you are sledging has four more test centuries than you do. #INDvsAUS

If Tim Paine was a Civil engineer. #INDvAUS pic.twitter.com/iJ0ar5uudP

All that chatter was worth shit. Can't even do his job, fuck off Tim Paine

tim paine deserves this guy and that's exactly why I am missing him there 😔 pic.twitter.com/pueDvJVBwe

Paine has been fined 15 % of his match fees for showing dissent at the umpire’s decision following a failed review during the third day of the test match. He is expected face a fine for his behaviour against Ashwin and Vihari as well. “This is all a part of the game. The Test match battle but Painey won’t get away with that Language with the Laws above” said Stuart Broad after seeing the videos.

This is all a part of the game. The Test match battle but Painey won’t get away with that Language with the Laws above