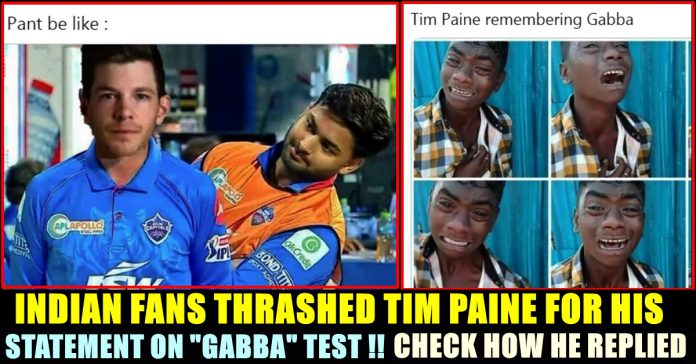 Fans of team India forced Tim Paine to give clarification after his statement on team India being very good at “niggling” and “Distracting” went viral. Paine said that team Australia fell for India’s ploys and stated an example to media which garnered the attention of the large number of Indian fans fair enough to roast the Australian keeper in social media platforms.

“Part of the challenge of playing against India is they’re very good at niggling you and trying to distract you with stuff that doesn’t really matter and there were times in that series where we fell for that,” said Paine to the media. “The classic example was when they said they weren’t going to the Gabba so we didn’t know where we were going. They’re very good at creating these sideshows and we took our eye off the ball.” he added.

As soon as the statement went viral, fans of team India emerged in social media with all guns blazing. Check out some of their reactions below :

“Atleast my Teammates like me”
~ Tim Paine to Ash. pic.twitter.com/aYgZ9PxhLw

It was Tim Paine who distracted Ravi Ashwin & Rishabh Pant relentlessly & Challenged Ash to Come to Gabba where Team India went despite Covid scare and
Slammed the Final Nail in Australia’s so Called Fortress
Why Sisy Paine is Pained for that Ass burn after a long gap#TimPaine pic.twitter.com/e8QEBxhrJ6

Tim Paine says India distracted Australia outside cricket to win the series. No Paine, you were more distracted by how much your teammates like you.😍

Tim Paine’s cute quotes about the India series come at a time when Cummins has been showing incredible leadership off the field.

Reacting to these comments, Paine came up with a clarification saying that he is not making excuses. “I certainly wasn’t making any excuses. I was asked about some of the challenges of the summer, and I said that was one of them for me.” Paine said.

“I love the Indian fans. I don’t mind getting a bit of stick, particularly when you deserve it. They ripped me off when I dropped those catches, I thought that was totally fair. Look, I love the passion, I love how much they love cricket. I love how much they interact and for some people, it is a positive interaction, but most of the time they are into me. But I don’t mind that,” he further said in his clarification.

Previous article“Who Will Get Vaccine When There’s No Vaccine ??” HC Slammed Centre
Next articleActress Condemned Maridhas For Demeaning Siddharth’s Profession !!

Kiran Kumar, owner of most famous Lalitha Jewellery, in his recent interaction with "Pattimandram" Raja for Thanthi TV, made an open statement saying that...

Former Chennai Super Kings Player Suresh Raina who went unsold in the IPL 2022 auction, came up with an emotional message in his official...

A 22 year old youth named as Sudhakar stabbed his school mate Premalatha Puthagaram after getting rejected by her. She has been admitted at...