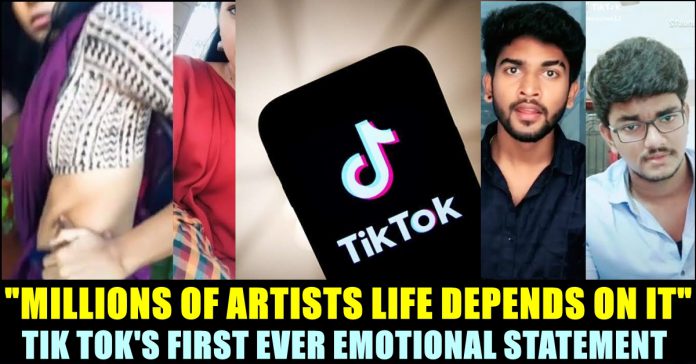 Tik Tok’s First Ever Emotional Statement Regarding The Ban !!

This movie could come as a blow to China’s Digital silk route ambitions, eroding the valuations of the companies. It could also lead more countries following India’s cue and acting against these apps, said sources. The government also raised complaints about data on users being transferred abroad without authorisation.

“These apps have been there for a long time, and there are some privacy and security issues with them including risks of data going out of the country” said an official regarding the ban. Economic analysts are believing that this move will fulfill the need or American apps will take market share”.

Big apps are in the list alongside #TikTok #UCBrowser #ShareIT etc

This decision created huge impact in the trending list of social media platforms as enormous number of memes and reactions started surfacing regarding the ban on the micro video creating app. For the past few days, the Tik Tok app has been creating controversy, instigating various issues. Violence against women, toxic masculinity and caste encouragement are taking place in the app is large number which made people from various part of the country to raise voice against it.

Now, regarding the ban, Tik Tok itself has came up with a reply to its users and to the Indian government. It termed the decision of Indian government of blocking 59 applications as an “interim order”. In the update, it said that Tik Tok has not shared any information of the users in India with any foreign government, including chinese government.

Nikhil Gandhi, head of Tik Tok in India said, that he would not do it even if he is requested to do it in the future. “We place the highest importance user privacy and integrity” their statement said. Their statement further said the livelihood of hundreds of millions of artists, story tellers, educators and performers depends on the application and trued to let Indian government to know about the importance of their app.

However, the app got trolled in the comment section for their emotional post where many people pointed out the flaws of the app.

TikTok is same as Wuhan Virus. There was no policy when it comes to comments on women safety, women humiliation. Religious propaganda.. etc

You find another job nikhil Gandhi. And have some shame

Previous articleLeaked Audio Of Police Officer Who Made Insensitive Comment On Facebook !!
Next articleCops Of Sathankulam Behaved Rude To Magistrates & Destroyed Evidences !!

90’s Kids Rumours Hashtag Ruling The Internet !! Check Out Some Of The Best Here !!

As a kid of the '90s, it only seems fair to reminisce about the decade that brought about some of the funnest times we...