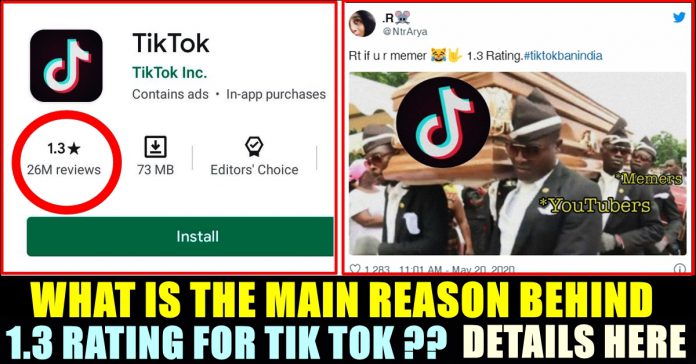 Ratings of Tik Tok app in Google Play store reduced drastically as a result of Twitter users trended various hashtags demanding Tik Tok ban in India. Among many hashtags, a hashtag #Tiktokbanindia is currently trending nationwide in the first place with more than seventy five thousand tweets. It all started when two influencers who belong to two different video platforms argued with each other through their videos. Now, it turned out as a huge controversy with nationwide attention. Indian social media users brought down the rating of the app from 4.6 to 1.3 in Google play store to express their anger.

The main reason behind this furore surfaced earlier this month when a popular Tik Tok creator named as Amir Siddiqui posted a video in Instagram accusing Youtubers. He called out the youtubers by accusing them for copying the contents from Tik Tok users to make contents. In a way of replying to him, popular youtuber Ajey Nagar, known as Carryminati, counter attacked Siddiqui’s video by lashing out at him through his Youtube channel. The video which contained obscene language was taken down for violating the platform’s terms and services. However, the roast video of carryminati was seen by millions of people before getting deleted.

As the video got deleted, fans of Carryminati started trending hashtags against the short video platform created by Chinese company ByteDance. Hashtags such as #RoastNahiFryKarunga, #BanTiktok, #BanTikTikinIndia, #TikToDown, #Tiktokexposed started trending in twitter against Tik tokers.

Memes and troll posts exploded in Twitter against Tik Tok and Amir Siddiqui, influencing people to downgrade the app. Several people joined the campaign and demanded ban on the Chinese app, accusing its creators of promoting violence, hatred and acid attacks. Critics are not only targeting the app but also its users who are largely emerging from smaller towns of the country.

Check out some of the posts under the hashtag :

Titktok CEO : How did the app’s rating go so much down
Memers : pic.twitter.com/pQDsswPVRC

This is a direct attack on Hindus.

they are spoiling INDIAN culture.

Are you agree then RT.
pic.twitter.com/NVkZdiU9TP

This India 😍
4.5 to 1.3 come on guys keep reporting 😃@CarryMinati make some new for public #tiktokbanindia pic.twitter.com/p9TMp8c4bT

The chinese app which was downloaded for more than 2 billion times across the globe is highly believed to extract the personal informations of every user. In India there 200 million people are using the app. Earlier, this app faced three months ban in April 2019 by Madras high court. At that time, it was accused for promoting pornographic content and exposing children to predators.