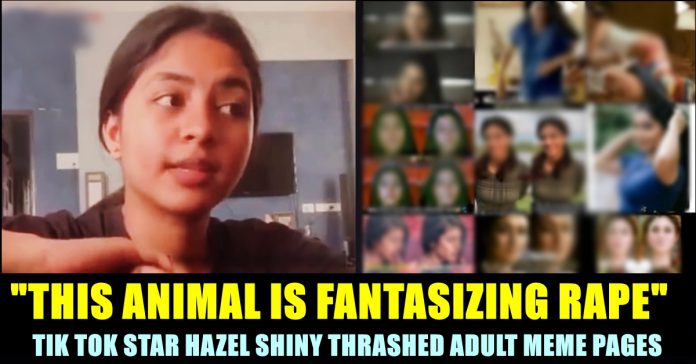 Hazel Shiny, daughter of renowned filmmaker Prabhu Solomon came up with a series of Instagram stories requesting her followers to help her report an adult Instagram page which promotes obscenity, violence and child harassments. She who rose to fame through the micro video posting mobile application Tik Tok, also wants to expose the culprit who is running multiple adult pages in Instagram.

“I would rarely ask you guys to report fake accounts. But this profile I am requesting you guys to report is a disgusting one. He is using the pictures of random girls, social media personalities, celebrities for his account. He is not even considering the age of those individuals as he is using the pictures of old women and pictures of teen girls such as Anikha Surendren and others. He is such a disgusting person” Hazel shiny fumes in the video.

Further Hazel goes on to expose the miscreant’s strategy to escape from getting reported in Instagram. “He keeps changing the name of his account to avoid getting reported. On seeing us reporting him constantly, he is making things difficult for us by changing the name frequently. No matter hpw many accounts he is going to create, we are going to keep reporting. I want you guys to help me in this” she requests her followers.

Further she informs that the guy owns another account and enjoys 22k followers for it. “What’s more depressing is that people who are creating quality memes are not gaining followers but these kind of accounts are getting followers. Please report that too” she said in her video.

In her next series of stories, Shiny updated that two of such accounts got terminated. “Lot of you are saying that those kind of accounts will keep emerging despite of getting terminated and suggested me to register a complaint in cyber crime. But it will take a long time for him to gain 10K followers again. He would definitely get frustrated and that’s what I want. Things he is writing in his posts are extremely objectionable. He is involving in such activities as his identity couldn’t be revealed in public, I will expose him soon” she said.

Watch the video of her below :

Here are the screen shots of the stories shared by Hazel shiny to make her followers report the accounts of the miscreant :

Hazel Shiny is currently enjoying 5 lakh plus followers in Instagram. She enjoys a separate fan base in social media platforms and a number of fan pages are being active only to adore her. This initiative of the youngster which involves her followers reporting the obscene pages in Instagram has grabbed headlines as well.

We came across many news in daily basis regarding harassment against girls in our society. In a bizarre situation, a nineteen year old girl...