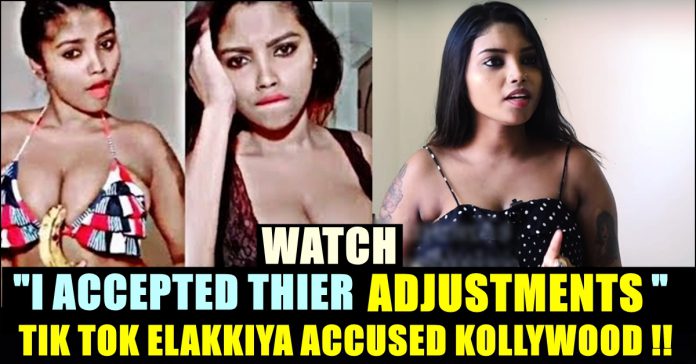 Tik Tok fame Elakkiya who enjoys a huge fan following in the micro vlogging social media app, has revealed how she got betrayed by a so called filmmaker for a movie opportunity. Elakkiya who identifies herself as an aspiring actress, shared her experience to a famous youtube channel Thi cinemas. There is a very slight chance for anyone using a smartphone may not have come across a Tik Tok video showing a Ilakkiya lip-syncing to a song. Launched in 2016 and originally called Musically, TikTok is one of the most popular apps today. Last year, it was also one of the most downloaded apps on Google Play and Apple Store.

Elakkiya who acted in a Tamil movie named as “Zombie” said that there is casting couch in Tamil cinema. “I have been trying to enter film industry before gaining fame through Tik Tok. I have done films before doing Tik Toks but none of those films released. I got the opportunity to act in Zombie through my Tik Tok fame. I attended the audition and acted the in the movie” she said in the interview.

About facing casting couch in Tamil cinema, Elakkiya said that influential people in film industry approached her directly for “Adjustments”. “Cinema is all about this. After committing in a film, the director would require a personal meeting before the shooting day. When we go there for a meeting, they would ask us to “be” with them. In a desire to act in movies, we would accept their demands but after that there will be no calls from them. They would put our number in their block list. They would have faked their identity to us. These things are happening in film industry. This happened to me personally” Elakkiya revealed.

Few days earlier actress Varalakshmi Sarathkumar said that she got approached for casting couch. The actress voiced against it and asked actresses to say “No and walk out of the project”. “It is a choice they are making. I have faced all these stories but I have learnt to say “no”. Knowing that I am a daughter of Sarathkumar, it is happening. I have heard recorded phone calls in which they will say that I won’t cooperate with their requirements” said Varalakshmi in the interaction.

Comment your views on these revelations made by the Tik Tok star !!