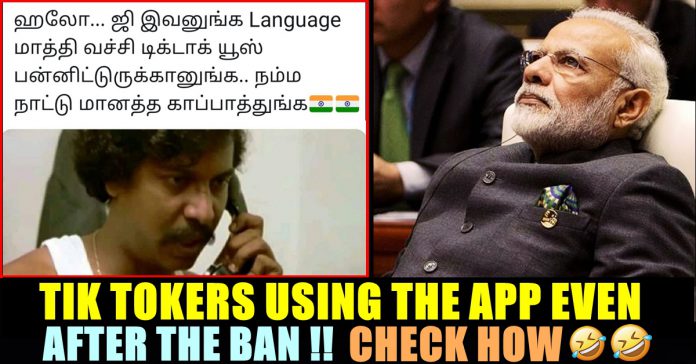 Soon after Tik Tok got banned by Indian government along with 58 other China based applications, users of India started using the micro video posting app by changing the language settings in the mobile application. The app works as nicely as before with few minor changes. Many non-tik tokers started trolling Indian government and demanding them to block the app once and for all.

Losing a million number of followers whom you earned by working on innovative videos for years, is not a pleasant experience to go through. In fact, it will cause depression, as one have to stop doing something which he/she have been doing for all these years in daily basis. As soon as the Indian government announced that they are going to ban Tik Tok app along with 58 other China based mobile applications to secure the privacy of Indian citizens, social media divided into two. Some criticized the government by saying that it is not an appropriate way to get our revenge for the loss of our 20 soldiers at the border and few stated that this decision from Indian government is not going to affect china’s economics at all. However, the other set of people backed the Modi government’s decision and said that it is just a start for a country like India to be “self-reliant”.

Among the 59 mobile applications which got banned, Tik Tok is the prominent one which grabbed place even in Twitter trending as it had 12 crore active users from India. In its emotional “Goodbye” note, Nikhil Gandhi, Head of Tik Tok in India, said that millions of artists, educators, story tellers and performers depended on Tik Tok for their livelihood.

Many believed that it is just an interim ban and the app will be back in India soon. But we never expected that the app will make its come back this soon. Those who haven’t uninstalled the app in their smartphone, can now use the app by changing a simple language setting. Enormous number of users started using the app again and started uploading videos. The only change is that we couldn’t see the name of the settings in the app in English as before but in some other language.

Here’s the video on how the app is working again :

One of a twitter user tagged Prime minister of India Modi and asked him to ban the app properly. Many others reacted in various other ways, Check out some of them below :

If U plan to do the ban..pls do it properly 🙏🏻
Tiktok is being worked by changing the language.#BanTikToklnlndia #BanTiktok #banchineseapp #BJP

Previous articleFirst Bigg Boss Star To Support Vanitha’s Decision !!
Next article“No One From Her Department Called Or Supported” -Revathi’s Husband !!