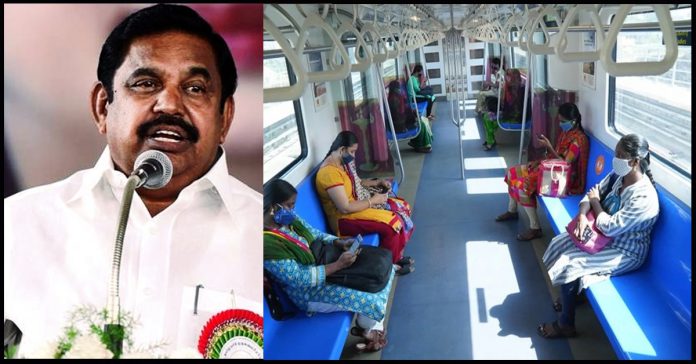 On Saturday, Tamil nadu Chief Minister Edappadi K Pazhaniswamy has announced that the ticket prices to travel in Chennai metro train will be reduced. The fare to travel the full length of Chennai metro will now be Rs. 50 instead of Rs. 70. The changes in the ticket prices of the Chennai Metrol Rail limited will come into effect from 22nd of February, said Chief minister Edappadi K Pazhaniswamy ahead of the Tamil nadu assembly election.

The new fare structure will demand Rs. 10 from the commuters for 2 kilo meters of travel, said reports. The fare is Rs 20 for distance between two and five kilometres. To travel a distance of 5-12 kilometres, a commuter will have to pay Rs 30. The next stage fare for a distance of upto 21 kilometres is Rs 40 and beyond 21 kilometres, the fare will be capped at Rs 50 instead of Rs.70. To those who book tickets through QR code and Chennai metro smart cards will be provided 20% of discounts.

Chennai metro fares has always been a subject to criticism among the commuters. The fare of Chennai metro is higher than the Airport line of Delhi metro. Now, this changes in the fares is expected to bring more commuters than before.

The unlimited day passes worth Rs. 100 for the 45- kilometre long phase-1 of CMRL will be valid at the same amount till Wimco Nagar. The monthly passes which Rs. 2,500 is also valid till Wimco Nagar. It is reported that Passengers can enjoy a 50% discount on their daily tickets if they travel on public holidays and Sundays.

Previous articleDhanush Indirectly Attacked At His Own Producer ??
Next articleMeera Mitun Accused These Heroines Of Copying Her Face & Style !!