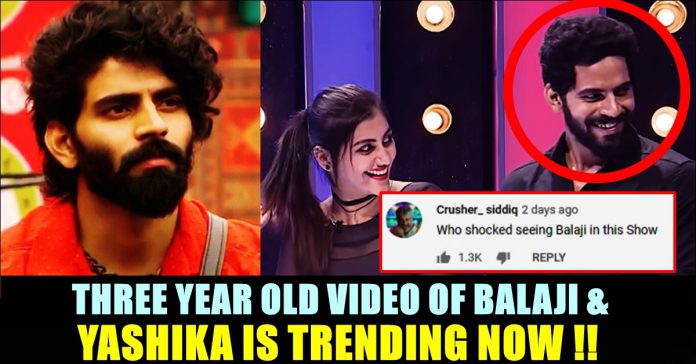 A three year old video of Balaji Murugadoss getting participated in a Vijay TV show is doing rounds in social media platforms now. The Bigg Boss contestant of the ongoing show, accompanied actress Yashika Anand as her teammate for the game show called as “Connection”, hosted by Jagan. The comments of the youtube video are filled with reactions from the followers of the Bigg Boss season 4.

He had issues with almost all the contestants due to various issues inside the house. The relationship between Bala and Shivani in the Bigg Boss house has always been under scanner. The physical intimacy they evidently show, made many fans to think that they are involved in a romantic relationship. The duo, however, repeatedly denied it and said that they are friends. Based on a task provided by Bigg Boss, they even identified themselves as brother and sister.

Now, fans who saw Balaji Murugadoss in the three year old video, couldn’t resist sharing it as he looks calm and composed in the game show. The video was uploaded in the official youtube channel of Vijay TV on 6th March of 2017. Balaji always had a thing for tasks it seems as he could be seen performing the connection game well. He also gets trolled by Jagan at one point.

Connection is a celebrity game show, played by three teams – each team has one celebrity and the other person could be their friend or family. The show was hosted by actor Jagan who is known for appearing in films such as “Ayan”, “Thoongavanam”, “Endrendrum Punnagai” etc.

Check out the glimpse of the comments section :

Balaji and Yashika are best friends since very long time it seems. Yashika who is known for appearing in films like “Iruttu Arayil Murattu Kuththu”, “Dhuruvangal 16”, participated as a contestant in the second season of Bigg Boss show. She was evicted on day 98, finishing the show in fifth place. She also received the cash prize of 5 lakhs for winning certain tasks during the second season of the premiere programme before getting evicted. She later appeared as one of the judges in Star Vijay’s “Jodi Unlimited” TV series, which aired in 2019. She was last seen in Yogi Babu’s “Zombie”.

Previous articleCouple Got Arrested For Cheating Three Banks !!
Next articleAjith Stopped Talking With Mirchi Shiva Because Of This Scene ??

Friends is a 2001 Tamil romantic comedy drama film, directed by Siddique and produced by Appachan. The film features Vijay, Suriya and Ramesh Khanna,...

A number of posts from Twitter users requesting music composer Anirudh Ravichander not to endorse the online food delivery app are flooding the micro...