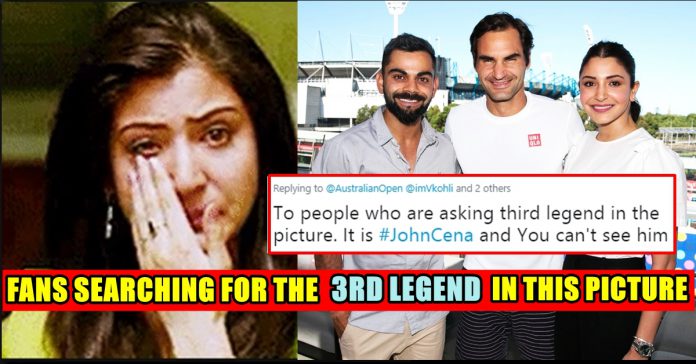 Indian Cricket Captain Virat Kohli along with his wife and actor Anushka Sharma visited the Melbourne Park on Saturday to catch some tennis action after India’s ODI series. The Indian cricket team has made history by winning the Test series and ODI series on the Australian tour and it won’t be incorrect to say that Indian skipper Virat Kohli led from the front and played an important role in India’s historic win. Bollywood actress Anushka Sharma, wife of Virat Kohli, was also in Australia when India won the ODI series and they both decided to watch an Australian Open match in which legendary Roger Federer was one of the contestants. Australian Open is the first tournament of the year in which top tennis players from all around the world participate. It was quite obvious for the couple to be treated in a special manner and they also got clicked with Roger Federer. Australian Open is being trolled by Twitterati after they uploaded a picture of Roger Federer, Virat Kohli, and Anushka Sharma on Twitter and captioned it: “Three legends, one photo”.

fixed it, since you said ” Legends “.
👍 pic.twitter.com/DE5O7uaDwU

So next time I meet Roger and I am a legend 😀

Who is the third legend? You forgot to put his/her picture.

To people who are asking third legend in the picture. It is #JohnCena and You can’t see him

If Anushka is a legend then I am prime minister of India ! 😂

@AustralianOpen one is cricket legend in the making, one is tennis legend, and the last is the ‘meme’ legend

I think third legend is taking a the picture … Right?

Anushka Sharma is the only legend,
Rest two are just intnl players

3 legends??? Wow !!! If marrying a cricketer makes you a Legend then I want to be a legend too.

Legend in what?? Being a part of flop films

Wow, you marry Virat Kohli and you become a legend

I hope you’re referring to the Cameraman 📷 as the Third Legend..!! 😂

Anushka was last seen in ‘Zero’, co-starring Shah Rukh Khan and Katrina Kaif. It was released in December 2018. What do you think on this ?? You also don’t think Anushka is a legend ??