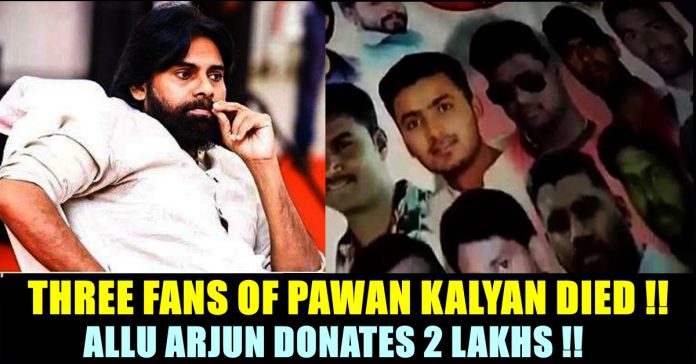 Three fans of actor Pawan Kalyan died and three others heavily injured while erecting a banner which involved electrical wire. The three of the deceased were electrocuted, according to the reports. The incident was reported from the Shantipuram area in Chithoor district of Andhra Pradesh.

Two of the three victims were brothers and they are identified as Somashekar (31), Rajendra (29) and Arunachalam (20). The ardent followers of the actor turned politician were making the arrangements to the celebrate their idol’s birthday which is on 2nd of September.

The accident took place around 8 : 30 PM when the iron railing of the banner came in contact with a live wire while the banner was being raised, according to Police. The police have registered a case under relevant section and the investigation is currently on.

The Janasena party of Pawan Kalyan while expressing their condolence, announced a financial support of Rs.2 lakh for the family members of the deceased. Pawan Kalyan, in a press statement he released, stated that it was his responsibility to support the family. The actor had repeatedly requested his fans not to celebrate his birthdays. However, fans started celebrating it since June month. Earlier, in 2018, a similar incident took place in which two fans of the same actor died while erecting banner.

Producer Boney Kapoor who is producing Pawan Kalyan’s upcoming film “Vakeel Saab” also announced an amount of Rs.2 Lakh as the financial support for the deceased.

Actor Allu Arjun also came forward and donated Rs. 2 Lakhs for the family of the victims.

Telugu party president Mr. N Chandra babu Naidu, who represents Kuppam in the assembly, expressed shock over the tragedy. He requested the officials to arrange for better treatment for the injured. Actor Pawan Kalyan who turn 49 on Wednesday, is an actor, producer, director, screenwriter, stunt coordinator, playback singer, choreographer, and politician. He is well known for his mannerisms and stylish fight sequences which he depicts in his movies regularly. He is the youngest brother of Telugu Superstar Chiranjeevi.

Fans of top-tier actors are highly requested not to involved in such activities in future. The entire South India based social media users are expressing their regret over the tragic incident.