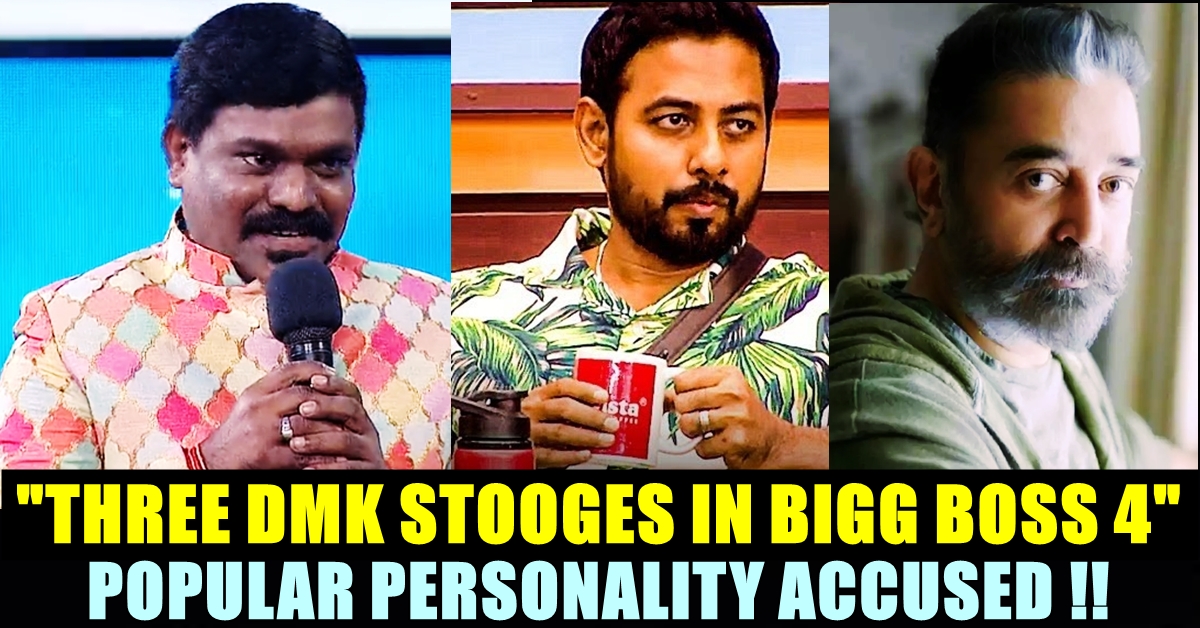 The fourth season of Bigg Boss has started and is already grabbing headlines for various reasons. In a shocking tweet, Mirchi Suchi, a popular radio jockey and playback singer has posted a tweet saying that 3 people who belong to DMK party have participated in the show and trying to gain people’s support by repeatedly using the word “Vivasayi”.

Mirchi Suchi, in her tweet said that singer Velmurugan, actor Aari and one more contestant belongs to the DMK party. Through her tweet, Suchi said that aari mobilised the student community on behalf of DMK during Jallikattu protests. She said that three won’t stop saying “Vivasayi” to gain people’s support.

“3 DMK stooges in BiggBoss4 – Ari, Velmurugan and unknown sweet-smiling Guy. May I remind u that Ari mobilised the student community on behalf of DMK during the jallikattu protests. These 3 won’t stop saying ‘vevasaayi’ in the house. Vevasaayi WHAT? What about them?” her tweet said.

3 DMK stooges in BiggBoss4 – Ari, Velmurugan and unknown sweet-smiling Guy. May I remind u that Ari mobilised the student community on behalf of DMK during the jallikattu protests. These 3 won’t stop saying ‘vevasaayi’ in the house. Vevasaayi WHAT? What about them?#BiggBossTamil

For this tweet, she got confronted by one of a twitter user. He asked what’s wrong in speaking about “Vivasayi”. Here’s how she replied :

Vevasaayi nu sonnaa patthaadhu brother – what about the vevasaayi? DMK has used Bigg Boss as a vehicle – smart move. But verum smoke & mirrors seems to be the agenda. U can’t say ‘vevasaayi’ 10 times on day 1 and clock points. And avar peru Somu/Sombu not sure. Ari ku open jalra

To another Twitter user who asked Suchi to point out people who belong to BJP, Shichi wrote “Enga povaanga – will come out eventually. Maybe you’ll point them out before me.”

Enga povaanga – will come out eventually. Maybe you’ll point them out before me.

Another user said that the three people who Suchi mentioned have not done anything wrong and alleged that Suresh has asked Balaji about his caste. Check Suchi’s reply to him below :

Am honestly waiting! They’re more keen on an image makeover and instant-attaching to tamil issues at the surface level only. Disappointing so far.

On seeing the contestants list, fans started reacting in various ways. Army pages for the female contestants have started emerging in social media platforms. Many of the contestants were either personally or officially related to Kamal Haasan. Actor Aari said that Kamal inaugurated his trust whereas model Balaji Murugadoss said that he met Kamal Haasan personally in his office after achieving in body building. Actress Gabriella said that she acted as a younger sister of Sruthi Haasan, daughter of Kamal Haasan.