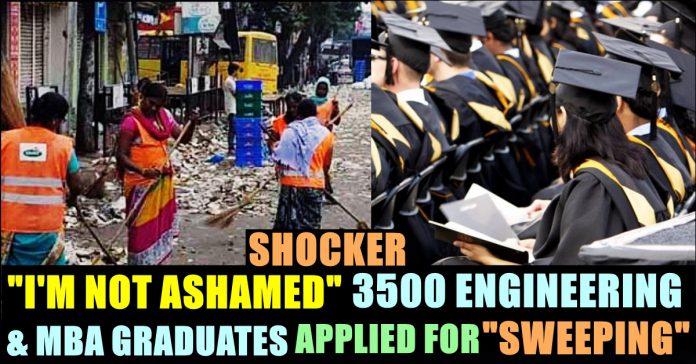 This is not the first time we are coming across a news on graduates applying for the jobs which are inappropriate to their degrees. More than three thousand five hundred graduates have applied for the post of sweepers in Tamilnadu’s Coimbatore city. Unfortunately there are only 549 vacancies are available for the post according to reports.

Among the thousands who made their presence at the city’s corporation office for certificate verification and interview, there were 500 candidates with professional degrees attended. This enormous number of applications forced the authorities to allocate two more days to short list candidates for a position which only requires fluency in Tamil and offers monthly pay between 15,700 to Rs. 50,000.

A top official told to Hindustan times that they found the job applications of nearly 3,500 degree holders while going through them. Among the applicants Vignesh S, who studied mechanical engineering in a private college is just 22 years old. On applying for the job, the youngster reportedly said that he was not feeling ashamed to apply for the job of a sweeper’s post. He further added that he has a family, including an unemployed father to feed. However, Vignesh’s primary reason behind applying for this job is that he couldn’t find an appropriate job for his educational qualification.

Considering the “Job security” and the “benefits of government job offers”, 28 year old Rahul who completed master degree in commerce applied for the sweepers job as he failed to find a job that matches his education.

However these sudden applications from graduates affected the job opportunities of contractual sweepers who are feeling that the arrival of graduates in this field is an unfair competition to them.

A 36 year old female sweeper who joined the job in 2006 after passing 12th standard, complained about the degree holding applicants by saying that she feels disappointed on seeing her new competitors. She is working as a sweeper on a contract with the civic body.

Earlier this year, In Chennai, 4,000 youngsters applied for the 14 jobs of sweeper and sanitary workers. Among the 4000, around a hundred are highly qualified young men and women candidates with MBA, MCA, B Tech, M Com, B Com, BBA and M Phil from across Tamil Nadu.

In Tamilnadu there are 500 Engineering colleges which are actively churning out students every year in big numbers. However there is no authentic comment or statement from any people in authority yet.

Comment your views on this unusual turn of events !!