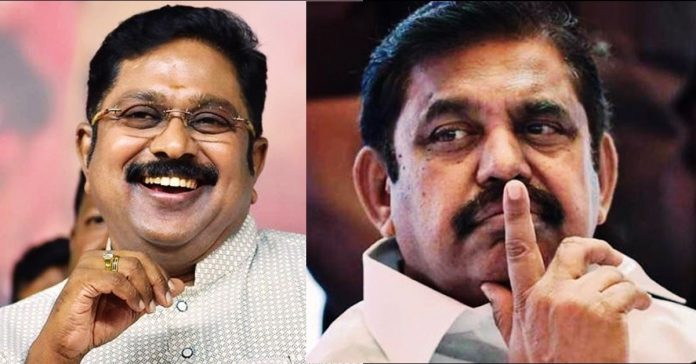 Tamil nadu chief minister Edappafi K Pazhaniswamy has slammed AMMK leader TTV Dhinakaran by saying that anyone who trusts him would be abandoned in a midway and accused him of attempting several times to capture the party. He said it while delivering his speech for the campaign that took place in Vellore.

Since the release of Sasikala from Bangalore jail, Tamil nadu politics is witnessing a tensed atmosphere. The ADMK administrators who are stretching their supportive hand to Sasikala and co are facing immediate expulsion from the party by Chief Minister and Deputy Chief minister.

On Tuesday, Chief minister Edappadi K Pazhaniswamy, while delivering his speech for the election campaign in Vellore, said that people who are trusting AMMK General secretary T.T.V. Dhinakaran would be left alone in the middle of a path.

“He was expelled from the party by Late chief minister J Jayalalithaa 10 years ago” said Chief minister Edappadi K Pazhaniswamy who added that he was not even a basic member since then. “After her demise, he himself announced that he rejoined the party and tried so hard and made several attempts to capture the party. He ended up capturing our 18 M.L.As and abandoned them. Those who are trusting him would only be left alone in the middle of a path.” Chief minister Edappadi K Pazhaniswamy said during his speech.

Further, Chief minister Edappadi K Pazhaniswamy said that many are plotting plans against ADMK to make DMK win the upcoming election and vowed to break all such moves.

Previous article“I Looked Less Attractive & He Couldn’t Do Romance With Me” – Suriya’s Heroine
Next articleVijayalakshmi’s Fitting Reply To Those Who Schooled On “How To Dress” !!