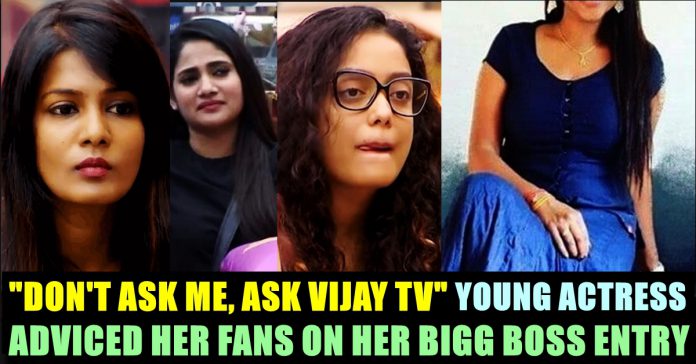 Started by having 16 contestants, the show features only 13 contestants now as Mohan Vaithya, Vanitha Vijayakumar and Fathima Babu got evicted already. Every season, BIGG BOSS would send a wildcard contestant during the midway of the show. Harish Kalyan and Vijayalakshmi were the notable wild card contestants in Tamil Bigg Boss show.

Meanwhile the expectation raised sky high on the wild card contestant of the third season. Fathima babu who got evicted on the first week, in one of her interview said that Kavin is not a perfect match for Losliya and she said that her love of life may arrive in wild card.

Shalini Shamu, who recently revealed about her #MeToo movement alleging a Telugu director of asking her to sleep with her, expressed her wish to make her entry inside the Bigg Boss house. The actress who got a huge number of followers received many requests from her followers to enter the house it seems. She asked them to stop requesting her. She said that the decision is to be made by Vijay Television.

Shalu Shamu is an actress who has appeared in Varutha Padatha Vaalibar Sangam movie as the heroine’s friend was last seen in Mr.Local in a small role. In her Instagram story, she said “I can’t reply the same answer to everyone. So I’m posting it here for everyone to know that it’s not my decision alone to enter bb3 as contestant or as a guest. This call to be taken from Vijay Television. So instead of asking me, you can ask Vijay Television to tell who gonna be the 17th contestant” her Instagram story read. She also conducted a “Yes or No” poll to let her followers express their wish on her entry in BIGG BOSS house. Check out her story here : Earlier in an interview with Behindwoods, Shalu Shamu said that Alya Manasa might be the 17th contestant of the show. Shalu said that her serial “Raja Rani” has ended in Vijay Television. She also reiterated the fact that Vijay television would make 2 Vijay TV members to participate in every season. “As Kavin is already inside the house, Alya Manasa would be the 2nd contestant to participate in the show as a Vijay TV member” Shalu added in the interview. The Wild Card Contestant Of BIGG BOSS TAMIL -3 Revealed By Shalu Shamu !! WATCH VIDEO !! How it would be if Shalu Shamu enter the BIGG BOSS house ?? Comment your views below !!

Previous articleJasprit Bumrah Denied To Reveal His Thoughts !! These Reactions Are Beyond The Limit !!
Next articleThis England Cricketer Laughed At Dhoni’s Decision !! GOT SEVERELY TROLLED !!

A video of Bigg Boss contestant Queency admitting that a team which is working for her outside will support Manikanta in votes is trending...