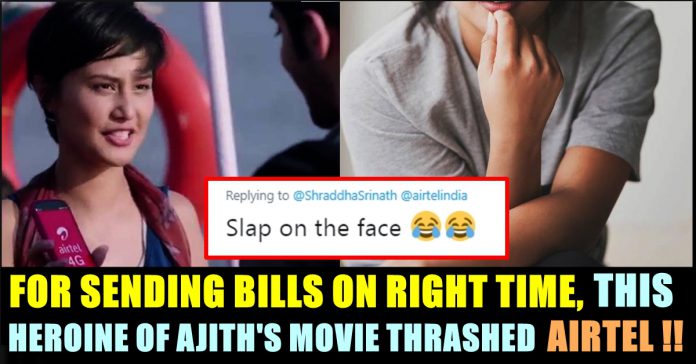 Shraddha Srinath is an Indian film actress who predominantly appears in Tamil and Kannada films. She has also appeared in a number of Telugu, Hindi and Malayalam films.She gained wide acclaim for her role in the Kannada psychological thriller U Turn for which she won the Filmfare Award for Best Actress and also for her performances in Urvi, Vikram Vedha and Operation Alamelamma. For the latter, she won Filmfare Award for Best Actress (Critics)– Kannada award. She has acted with South Superstar Ajith Kumar in his upcoming movie Nerkonda Parvai which is a remake of Bollywood blockbuster PINK. Shraddha did the role of Taapsee Pannu. Now the actress has came up with a tweet criticizing Airtel network for not responding to her calls regarding a problem she is facing with the network.

In her tweet she wrote “Hi @airtelindia . I love the promptness with which you send me my monthly bill. Maybe you could show some promptness in resolving the issue for which I’ve been calling you over and over again. Great DP btw, big fan.”

Hi @airtelindia . I love the promptness with which you send me my monthly bill. Maybe you could show some promptness in resolving the issue for which I’ve been calling you over and over again. Great DP btw, big fan.

Airtel is an Indian global telecommunications services company based in Delhi, India. It operates in 18 countries across South Asia and Africa, and also in the Channel Islands. Airtel India is the second largest provider after Vodafone Idea Ltd of mobile telephony and second largest provider of fixed telephony in India, and is also a provider of broadband and subscription television services. It offers its telecom services under the airtel brand. 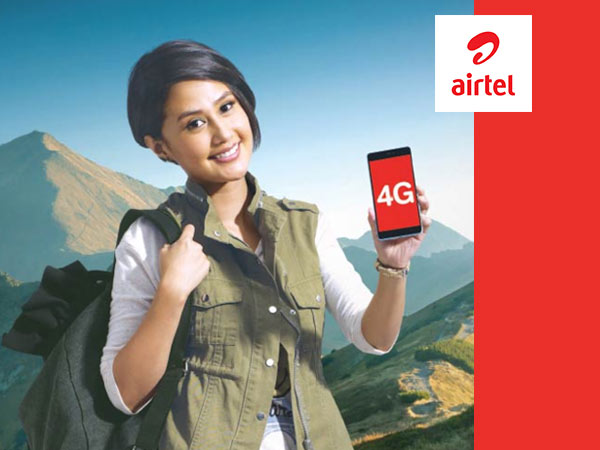 Check out some of the reactions for Shraddha’s tweet here :

Whatever be the case, they are prompt in responding and period that’s it. It doesn’t go beyond that. Perhaps they have better customer care staff and bad technical staff maybe!

I’m following up with my network issue last 18 months yet no response at all ever. #worstAirtel

Bills and extra charges will be right on time. Bingo !

Really appreciate the info ! I’m taking a closer look into it, and will share all necessary updates in a DM. In the meantime, thanks for bearing with us! Thank you, Sandeep Singh https://t.co/2G23qpsqlP

Previous articleWhat Is The Connection Between Vijay Birthday & Chennai Rains ?? Ravi Ashwin Revealed !!
Next articleChinmayi Once Again Shared The Screenshots Of Horrific Sexual Harassments !! So Cruel !!