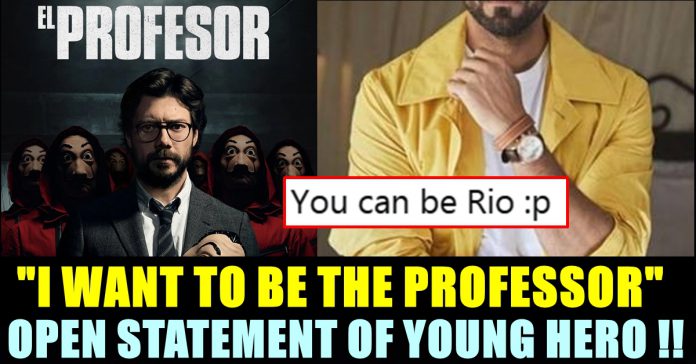 It is no surprise that makers from our country trying to remake the popular Netflix series “La casa De papel” aka “Money Heist” as they are very much known for ripping off contents from other countries. Now, a young and emerging actor who has been exhibiting versatility through his works has expressed his wish to portray the role of “Professor” in Indian version.

Fourth part of Netflix’s successful web series “La Casa De Papel”, popularly known as “Money Heist” released recently only to trend worldwide. The series which garnered fans from all over the world with its previous three parts, didn’t fail to impress its followers in the fourth part as well. With compelling characters, chronological narrative structure and most importantly the intricate heist which makes the viewer to reach the edge of his seat for every scene, gained the series a global level acclaim.

Money Heist is Netflix’s most watched program in four major countries such as France, Italy, Argentina, Chile. Binge watchers from our country are no exception which is evident through the memes and write-ups surfacing in social media platforms regarding the series since the release of the fourth part. Their obsession towards the series went too far that they started comparing the lead characters of the series with their favourite stars.

Now, an actor himself expressed his wish of playing “Professor”, the lead role played by Alvaro Morte. The role is all about working behind the heist in planning and executing it. It plays as an “Mastermind” of all the gang members of the heist and lives of the thieves depends on the decisions made by the “Professor”. Ayushmann Khurrana who is known for appearing in films such as “Andhadhun”, “Article 15”, came up with a post saying that he desperately wants to play the “Professor”. He posted a video of himself playing “Bella Ciao” in his piano, posted the tweet in a way of reaching out to all the reverent filmmakers in India.

“I want to be the professor. I want to put this out in the universe. Hello reverent filmmakers! Please! I’m dying to do something like this. I’m itching to go on sets & work, like each and every human. But patience is a virtue they say. Calm down. Till then Bella Ciao” his tweet read.

I want to be the professor. I want to put this out in the universe. Hello reverent filmmakers! Please! I’m dying to do something like this. I’m itching to go on sets & work, like each and every human. But patience is a virtue they say. Calm down. Till then Bella Ciao #MoneyHeist pic.twitter.com/ZOLhCypgrU

This tweet from Ayushmann received highly positive response as the actor has proved himself through his previous ventures. However, one of a fan said that Ayushman can play “Rio” in a “Money Height” whereas the “Professor” should be played by Shah Rukh Khan.

To that tweet, Ayushmann said that he himself a biggest fan of SRK. Check out his replies to his followers below :

What do you think on Ayushman playing the role of “Professor” aka “Sergio Marquina” ?? Comment your views below !!

Previous articleLawrence Announced About His Next Donation !!
Next articleNetizens Couldn’t Believe This Transformation Of Actress Shivani !!

Video of a bunch of school girls fighting with each allegedly over a boy is doing rounds in social media platforms with various kind...

A video of actress Rashmika Mandanna ignoring an unprivileged who stretched her hands and sought help to her while she was on her way...