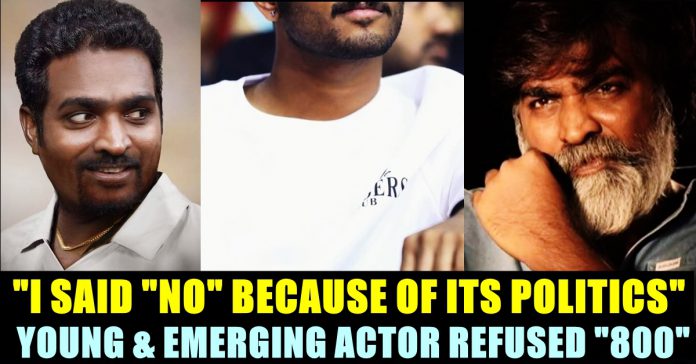 Amidst the furore created by the first look posters of “800”, a biographical picture that is going to be made on the life history of ace Sri lankan spinner Muttiah Muralitharan, young and emerging actor Teejay Arunachalam who debuted last year through Dhanush’s Asuran, has disclosed that he was offered a role in the movie and refused it due to its politics.

Teejay who initially rose to fame through his independent single “Muttu Muttu” which became an international hit, gained fame among the mainstream Tamil cinema audience through his appearance in critically acclaimed filmmaker Vetri Maaran’s “Asuran” as Dhanush’s son. He got highly praised by the critics for the way he performed his role and got his face recognised among the Tamil audience.

The 26 year old actor, in an interaction with Times of India, revealed that he was approached to do the younger version of Muttiah Muralitharan in the film. However, he refused to accept the project as he had issues with its politics. The young lad said that he met the filmmaker of it in his office when he was in India.

After the filmmaker narrated the bits and bobs of the script to Teejay, he decided to not take the role. “I was approached to play the younger version of Muralitharan with the elder version to be played by Vijay Sethupathi sir.” said Teejay who went on to add that the war between the Tamils and the Sri lankan government is depicted in the biographical picture.

“It did not sound right to me. My mother is an Eelam Tamil. There was a lot of cruelty involved in the war and I did not want to get involved in the politics of the film’s narrative.” Teejay added. The promising actor said “no” to the makers of “800”.

“It was a tough decision because I have the utmost respect for Vijay Sethupathi sir and have spoken with him a lot. He had appreciated me for taking up a strong role like “Velmurugan” in Asuran. He suggested me to be very careful while choosing scripts and so I have” he reportedly said.

An online outrage has been raised condemning the actor for choosing the project. A hashtag saying “Shame on Vijaysethupathi” trended in the micro blogging social media site after the motion poster of project “800” released in youtube. The only motto of all those who are opposing the project is to make Vijay Sethupathi leave the project. They doesn’t want him to represent the flag of Sri lanka and Muralidharan who reportedly stood along with Sri lanka when Tamil genocide took place.

Director Cheran who is expected to collaborate with Vijay Sethupathi in near future, posted a tweet suggesting Vijay to leave the project. “Tamizh people from the entire world wants you to leave “800”. This film is not bigger than the people who helped you to grow, their feelings and the incident where people of Tamil Eelam died. Leave it. There are Thousands of roles waiting to nurture your acting skills” he wrote in his tweet.

Popular lyricist Thamarai released a press statement saying that Muttiah Muralidharan is a person who celebrated Tamil genocide. She wanted Vijay Sethupathi to leave the project for his own good. Thamarai said that the history would remember him like it is remembering “Ettappan” if he accepts to do the project. Muttiah Muralitharan is a historic spittle which should be spitted out. “We should not let it soak us” Thamarai said in her long statement.

She further suggested Vijay Sethupathi to do the role of LTTE leader Prabhakaran and said that the history will celebrate him. “Your looks resembles someone else. Do that and see how history remembers you. I have uploaded the photos, look yourself in the mirror and get ready” she said in her statement.

Previous articleNot Only Fans, Even Tamil Cinema Celebrities Advising Vijay Sethupathi To Leave “800” !!
Next articleHarbhajan Directly Attacked Dhoni Only To Get Trolled By His Fans !!

Chennai IT Employee Blackmailed By Woman In Facebook After Sending Nude Pictures !!

Crimes that are taking place in social media are increasing in vast number as everything, including sexual intercourse turned digital nowadays. Amidst the ongoing...

There is no actor with "zero haters" in the Internet era. Actor Vijay Sethupathi who was considered as one of the very few Tamil...