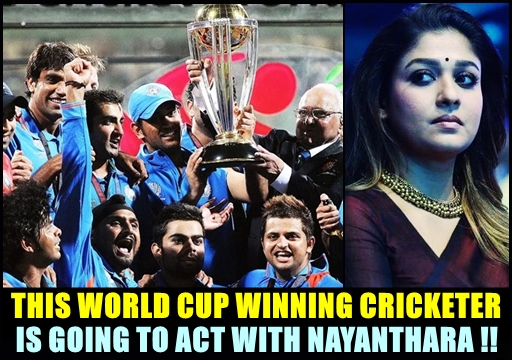 Former Indian pace bowler Sreeshanth who played an important role in team India winning the 2007 T20 world cup, is all set to make his Kollywood debut through “Kaathu Vaakula Rendu Kaathal” which has Lady super star Nayanthara, Vijay Sethupathi and Samantha in the lead roles. It has been reported that the impulsive cricketer is going to play a pivotal role in the Vignesh Shivan directorial which is currently undergoing the post production process.

Sreesanth was banned by the Board of Control for Cricket in India (BCCI) in 2013 for spot-fixing. His 7-year suspension came to end on 13th of September 2020. He has been showing his desperation to play International cricket since his ban got lifted. He also wanted to represent a team in IPL 14. However, none of the eight IPL teams shortlisted Kerala based fast bowler in their team. He who recently made his comeback to cricket, is pretty much active in social media platforms.

It is notable that Sreesanth joined the Bharatiya Janata Party in the year 2016. He contested and lost the Kerala Assembly elections from Thiruvananthapuram. He secured a total of 34,764 votes but lost the election to VS Sivakumar of the Congress by 11,710 votes. He also took part in the Hindi version of Bigg Boss as a contestant. Now, the 38 year old is all set to make his debut in Kollywood film industry through “Kaathu Vaakula Rendu Kaadhal”.

The film which is being produced by Seven screen studios and Rowdy pictures of Nayanthara and Vignesh Shivan, has Anirudh Ravichander as music composer. Going by the social media posts of director Vignesh Shivan, the film is currently undergoing the dubbing process.

The love tale is going to see leading south Indian actresses Samantha and Nayanthara sharing screen space for the first time. This is the second collaboration between Nayanthara and Vignesh Sivan after “Naanum Rowdy Thaan” during the filming of which, the director and actor duo fell in love.

They got engaged recently and the actress revealed about it during the promotion of her recently released “Nettrikann”. Nayanthara and Vignesh Shivan are also concentrating on producing and distributing films. With “Rocky” awaiting for theatrical release, the duo’s “Pebbels” sent to Oscars as India’s representation. A film is being made having Bigg Boss fame Kavin as lead as well. However, we have to wait till the release of “Kaathu Vaakula Rendu Kaadhal” to see how Wikki used the former Indian pacer who is known for his animated gestires on field.

India lost the first test match against England that took place in the Chepauk stadium of Chennai. The poor display of batting performance from...

India won their first ever Test series in Australia after the fourth and final match at the Sydney Cricket Ground ended in a draw...