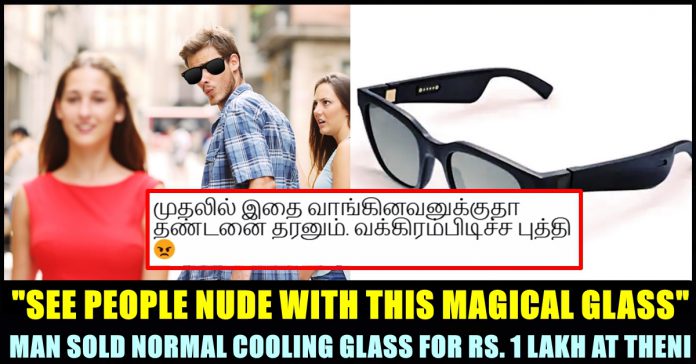 Tamil nadu police arrested a culprit who cheated public by selling a normal eye glass, claiming that it would help one to see people naked. Officials are also searching his partner who escaped with Rs. 1 lakh cash. The incident took place at Theni district and created huge furore among the people of the locality.

Asaramuthu and Divakar who belong to Uppukottai village which is located near Theni Veerapandi of Theni district, planned together to cheat people by selling a normal eye glass by making them believe that the magical glass would help one to see others naked. They finalized Rs. 1 lakh to a man named Yuvaraj who belongs to Kumbakonam. “It would show people who appear in front of you naked” said the duo to Yuvaraj and made him believe, says reports.

Believing the same, Yuvaraj reached Theni district in his car with Rs. 1 lakh cash along with his friends Srinivasan, Madhan and Varadarajan. Asaramuthu and Divakar invited Yuvraj and his friends to a graveyard that is placed near Periyakulam municipality. When the group reached the spot, Divakar and Asaramuthu gave them an eye glass and left the place in haste.

After realizing that the eye glass is a normal one that is made for elder people, Yuvraj chased Asaramuthu and Divakar with his friends. However, Divakar escaped with money and Asaramuthu got caught, says reports. After producing him in Periyakulam police station, YUvraj explained to the police how he got cheated. Based on his complaint, Periyakulam police officers are investigating the case. A search to nab Divakar who escaped with the money is on, according to reports.

The report is making headlines among the users of online platforms with hilarious reactions. “Arrest the one who wanted to see girls naked through the glass” a social media user commented with many others making similar comments. Check out some of the reactions below :

First ever glimpse of "Nayanthara: Beyond the Fairytale", a show that is being made by Netflix based on her real life is out and...