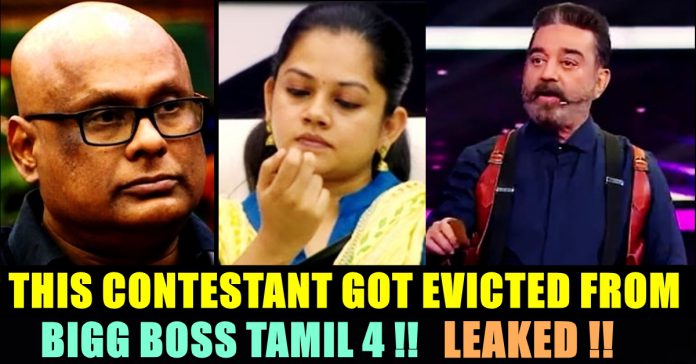 As the shoot of Bigg Boss’s weekend episode got over, a number sources in social media had revealed the evicted contestant of third week. The three promos which got released so far, showed Kamal haasan analysing the major incidents that took place inside the house during the weekdays. He said Sanam shetty didn’t disrespect Suresh Chakravarthy by accident during the Demon Vs Royals task and revealed that she already discussed about it to Vel Murugan.

In another promo, Balaji Murugadoss could be seen complaining to Kamal Haasan against Archana about her attitude towards him. Check out the three promos below :

Now, as far as the weekend eviction is concerned, four contestants namely, Anitha sampath, Aari, Suresh Chakravarty and Aajeedh were nominated by the other contestants. Anitha Sampath was involved in a number of verbal spat with her housemates for past three weeks.

Aari grabbed the attention of the audience with his genuine attitude and was active inside the house by giving advice to his co-contestants. Suresh Chakravarty is being considered as the entertainer of this ongoing season as he had fight with almost all the contestants within 20 days.

Now, Aajeedh who couldn’t get enough footage for himself by interacting with his fellow housemates, failed to impress the audience it seems. Apart from getting the pass from Ramya Pandiyan, he didn’t involve in any kind of activities in the house.

According to reports, the youngster received less number of votes from the audience and got evicted. However, he used the free pass for himself and continued playing the game, reports suggested. This resulted in a “no eviction week” in Bigg Boss season 4.

#Aajeedh got evicted and saved himself with the eviction pass. Well deserve and expected.

However, we have to wait till tomorrow night for the episode to telecast to confirm the news that is doing rounds. What do you think on Aajeedh getting evicted ?? Comment your views !!