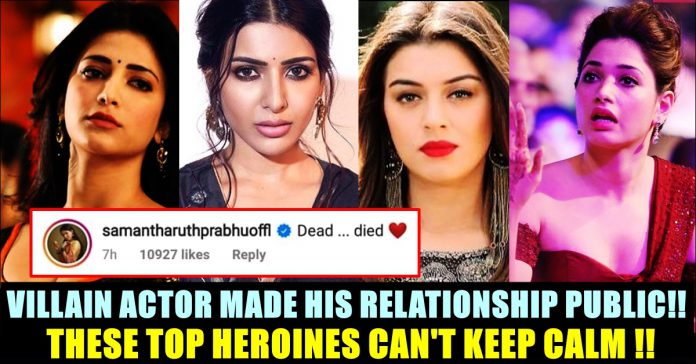 Rana Daggubati, the actor who is known for his role in the most famous Bahubali as Bhallala Deva, has announced about his marriage at last. Despite of the rumours that took place in media for a long time about his personal relationships, the actor cleared the air by announcing that he is going to marry a girl who is not related with cinema industry at all. It is notable that a strong rumour did rounds on actress Trisha and Rana having a romantic relationship.

The actor who took to Instagram to announce about his relationship with Miheeka Bajaj, an event planner who owns the Dew Drop design Studio in Mumbai. Rana wrote “And she said Yes :)” with an heart emoji as a caption for his post by uploading an adorable picture of themselves.

And she said Yes 🙂 ❤️#MiheekaBajaj

This post made many of his colleagues super happy that they flooded their wishes in the comment section. Some of the top actresses of Indian film industry expressed their happiness on the 35 year old getting married. Actors such as Dulquer Salmaan, Vikram Prabhu also wished their fellow actor.

Here’s the screenshot of their replies :

In 2018, when Rana was forced answer on the relationship of himself with actress Trisha in “Koffee with Karan” show, the actor said “She has been my friend for a decade. We have been friends for a long time and even dated. But, I guess, things didn’t work out” he said.

The learning and the joy!! #3yearsofbaahubali2 The best time!! 💥💥💥

Rana, started his career as a visual effects coordinator and turned as an actor through “Leader”. He later starred as the main antagonist in Telugu film Baahubali: The Beginning, which recorded the second highest gross opening for an Indian film. He then featured in a supporting role in Tamil film Bangalore Naatkal. In 2017, Rana later reprised his role as Bhallaldeva in Baahubali 2: The Conclusion, which became the highest grossing Indian film of all time. He has also simultaneously starred in the successful Telugu movies Rudramadevi, The Ghazi Attack and Nene Raju Nene Mantri.

On the work front, He is expected appear in a bilingual Tamil, Telugu film Madai Thiranthu and a Telugu film Virata Parvam. His marriage with his love of the life is expected to take place post lockdown. Lets wish them a happy life ahead.

Previous articleActress Questioned Why Modi Addressed The Nation In Hindi !!
Next article“It Is Impossible To Hack The App” Said Government !! Bangalore Techie Did It In 4 Hours

Selvaraghavan Regrets For Lying About His Film’s Budget !!

On Thursday, Director Selvaraghavan came up with a tweet revealing about a fact on how he lied about the budget of his "Aayirathil Oruvan"...