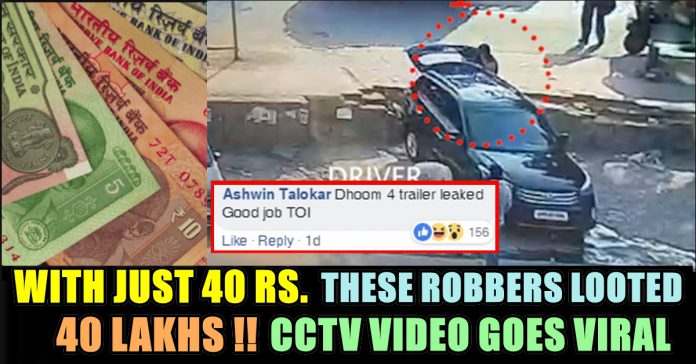 A car driver was robbed of Rs 40 lakh in broad daylight in Delhi’s South Extension area. According to media reports, members of ‘thak thak’ gang were involved in the pre-planned robbery. The entire incident was recorded on CCTV, and the video went viral on social media. In the video, it could be seen that a robber no. 1 strolled casually with a mobile in his hand. His eyes were focused on a car parked nearby. At the same time, two more robbers came. Meanwhile, robber no. 2 dropped some 10-rupee notes near the bonnet of the car, and robber no. 3 came and informed the driver about the money. Reacting to this, the driver came out of his car to collect the money dropped 2nd robber. In the same time, the first robber opened the boot of the car and took away the bag with cash inside. However, the driver of the car was unaware of the robbery.

This video of the robbery goes viral in Internet. The official facebook page of Times Of India uploaded the video.

The reactions of this post received are unexpectedly hilarious. Check out few of them here :

What do you think on this ?? Comment your views on this robbery !!

Previous articleList Of Top 10 Most Searched Indian Women In 2018 Released !! Check Who Is No.1 !!
Next articleThis Former Indian Team Captain’s Gesture Towards A Girl Fan Will Win Your Heart !! Check Out !!

On seeing her husband being blamed for the loss of India against Australia in the first T20 match, the cricketer's wife Nupur Nagar came...

The role "Bhavani" played by Vijay Sethupathi in the recently released "Master" is one of the most talked about antagonist roles in the recent...