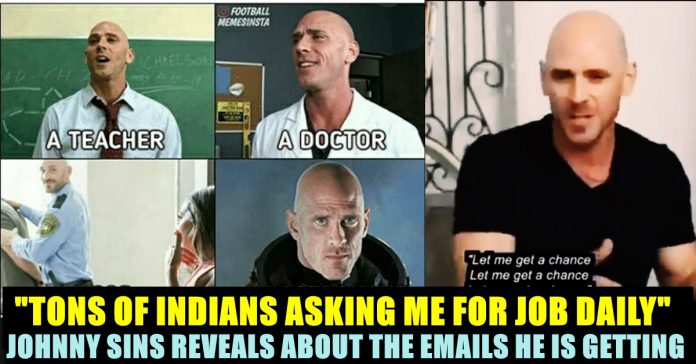 We all are aware of the economical situation of our country and the sufferings that lack of employment causing to the Graduated youths. But we did not expected that it will make the situation this worse. Yes, we are talking about the latest video of Johnny Sins giving interview to a famous Indian youtube channel.

In the modern age, everyone likes to have huge fan following in Asian countries like India and China. India has population over a billion and that is the reason why adult stars like Sunny Leone have done so well after entering Bollywood.

However Sins did not mentioned whether the Emails are from Females or from his Male followers but this is a serious thing that is required to be debated. If what Johnny Sins said was true, is Indians longing for it due to their passion towards the profession or it is just because the Unemployment crisis ?? Earlier Sins went viral for the same reason in Tamilnadu where an youth called in a Live show on Sun Music and said that he wants to become like Johnny Sins.

The Sun music host who seemed or pretended that she is not aware of the name Johnny Sins, wished her caller a very best wishes to become a popular actor like Johnny sins in future. The operators who works behind the camera also missed to disconnect the call abruptly. The song he requested also played.