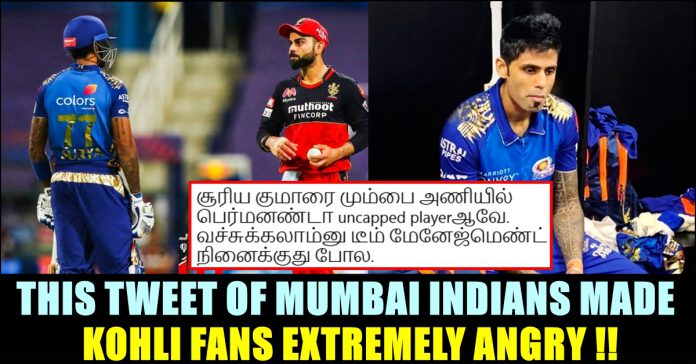 Amidst the furore created by the incident that took place in the 48th league of Indian Premier League, a post uploaded by the official twitter account of Mumbai Indians irked the fans of Indian captain Kohli who are fuming at the online handle. The post was written in a way of confirming that Surya Kumar Yadav starred at the captain of the national captain. The post, unusually gained a wide reach comparing to the other posts the Mumbai Indians twitter handle.

It all started when a video clipping of Surya Kumar yadav and Virat Kohli starring at each other surfaced in Internet. During the end of 13th over in the match between Mumbai Indians and Royal Challengers Bangalore, Surya tried to hit Dale Steyn at the extra cover but the ball was fielded by Kohli. Since, it was the end of the over, Kohli walked towards the crease with the ball and Surya stood there with a deadpan expression on his face staring at Kohli. Both the players starred at each other before Surya moved on with the bat.

It is one way of sledging the batsman to make him get out by destroying his peace of mind. However, fans got upset on seeing Kohli using the method to get the wicket of an upcoming Indian talent. On the other side, fans of Virat Kohli are stating that Yadav disrespected the Indian captain which made him to stare at him.

Meanwhile, the official twitter handle of Mumbai Indians, came up with a tweet praising Surya by posting the picture himself staring at Kohli. “He came, He s̶a̶w̶ stared, He conquered” read the caption of the Twitter handle. Check out their post below :

This post didn’t go well with the fans of the RCB captain. “Kohli: 70 centuries,60 odi average,50+ average in all 3 formats. Sky:35 list a average” commented one of a fan whereas another one wrote “a guy with 70 runs staring at a guy with 70 international centuries”

Utter nonsense post. It may entertain few fans, but this will be completely unnecessary to post this way irrespective of what happened there. Win or lose, he is India's captain, don't forget it

His attitude only he will take to his home finally. He will not selected in international cricket anymore😉 Let's c. even Ur vadapav itself not selected his VC position to gone😂 no mi players will selected for India bcoz u guys r testing the patient of king let's face the karma

BREAKING : Vijay Sethupathi’s Shocking Statement On The Fake News About Him !! He Totally Frustrated !!

Vijay Sethupathi, one of the very few actors who is not very active on social media, yesterday posted three back to back posts in...

With just 5 days to go for the inaugural episode of Bigg Boss season 5, a list of the final confirmed contestant has been...