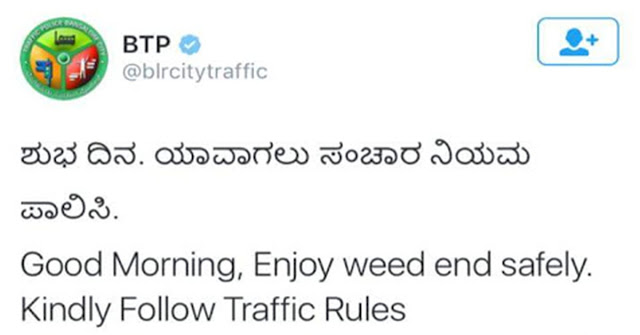 The Bangalore Police
sure know how to make their city people happy on a morning!

Can you
actually believe that your own police encourages you to have weed early in the
morning and want you to follow the traffic rules!!! Yeah, if you live in
Bangalore you’ll have the privilege of having the ‘Ganja’ with full support of
police department.
Just
kidding, this was actually an autocorrect mistake by them but which was a huge
mistake nevertheless. Instead of typing ‘Enjoy
week end safely’, they had typed ‘weed
end’! Ha Ha, should have seen the reaction on people’s faces 😀
People have
taken the tweet lightly and on a joking note. But imagine if they had taken it
seriously 😀 That would have been one awesome moment I guess!! Giving people
this kinda freedom would have become epic right!! 😛
Anyway,
talking about this seriously, they should have been careful and extra cautious
before tweeting something so vital in a social media, isn’t it? Twitter is one
of the biggest social platform and followed by millions of people, and would
impact a great deal on them.
We just hope
the next time they put something up, they read it once before posting it and
save people from having wild fantasies like smoking weed on road 😉