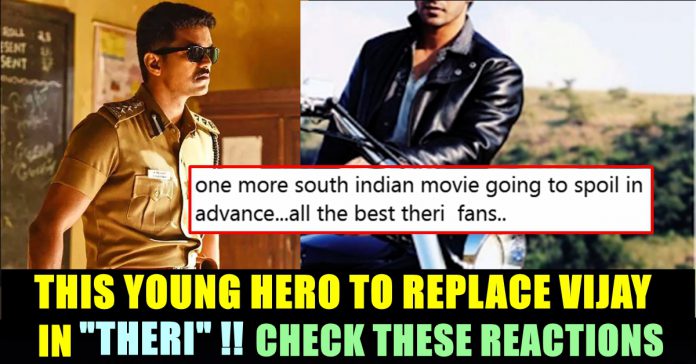 “Theri” marked the first collaboration Director Atlee and Vijay in 2016. The film became a blockbuster and now it is going to get a remake in Bollywood, according to reports. Initially it was rumoured that Bollywood Badshah Shah Rukh Khan is going to replace Vijay in the Hindi version but the news turned out to be a mere rumour as SRK got himself busy in his other projects.

The story of the film revolves around an ordinary baker who holds a secret identity as former Deputy Commissioner of Police. The film concentrates on how he completes a secret mission called as “Ghost Protocol” assigned by Police commissioner. The film had Amy Jackson and Samantha Ruth Prabhu as female leads. Mahendran, Prabhu, Radikaa played the supporting roles.

The film became a huge commercial success with mixed reviews from critics. After the success of Theri, Atlee & Vijay went on to collaborate in two more films named as Mersal and Bigil. Both of them became a box office success. Now, Atlee was rumoured to collaborate with Shah Rukh Khan in his fifth film and many fans speculated that it could be a remake of “Theri”. Akshay Kumar’s name also did rounds in remaking the blockbuster. Now, it has been official confirmed that not Shah Rukh but Varun Dhawan is going to replace actor Vijay in the Hindi version of the Vijay starrer. Atlee who directed the original is going to wield the megaphone for the Hindi version as well.

It is notable that the Telugu version of the movie is also on cards. Ravi Teja, one of the leading actor of Telugu film industry is going to reprise Vijay by having Catherine Terasa in the female lead role. Directed by Santhosh Srinivas, the film’s shooting got interrupted due to Corona pandemic and will resume post lockdown, according to sources. It is notable that the film’s dubbed version released in Telugu under the title “Policeodu”

Now, as soon as the news regarding Varun Dhawan doing “Theri” remake surfaced, few fans felt disappointed and started expressing their thoughts through the micro blogging social media platforms. As many films such as “Kaithi”, “Kanchana”, are going to get remakes in Bollywood in near future, fans expressed their disappointment. “Can bollywood stop with remake
Theri is my vijay fav film now bollywood will ruin this” wrote one of a fan. It is also notable that the Hindi dubbed version of Theri reached more 250 million views already.

Can bollywood stop with remake
Theri I my vijay fav film now bollywood will ruin this 😤😤😤 https://t.co/lFiOTnN8lv

Randeep hooda will suit for this role….but no one can match Vijay….

He should not do it. It'll damage the image. Most of his films are remakes.

Comment your views on varun Dhawan acting in the remake of Theri !!

Previous articleCouple Got Married Through Video Call Due To Lockdown !! WATCH
Next articleLast Tweet Of Rishi Kapoor Garners Wide Attention With Emotional Reactions !!

Venkat Prabhu is pretty much busy promoting his upcoming film "Manmatha Leelai" by appearing in interviews, uploading tweets, replying to fans in Twitter. On...

Bigg Boss Star Got Trolled After She Claimed Brad Pitt DM-ed Her!!

Indian actress Nora Fatehi who is known for participating in the 9th season of Hindi Bigg Boss show as a contestant, claimed that Brad...

Internet Reacts To A Hindu Man Beaten For Giving A Ride To A Muslim Woman!!

In Bengaluru, a Hindu man was assaulted for giving a lift to a Muslim woman. The woman was also verbally abused for going with...