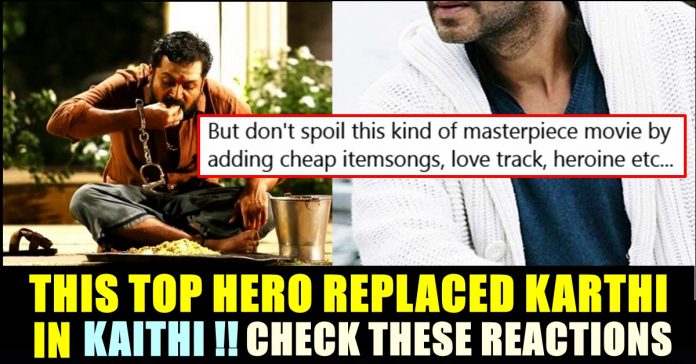 The official release date for the Hindi remake of Tamil blockbuster Kaithi was just announced by the makers of it. The film which became a huge blockbuster in Tamil is going to get a Hindi version on the 12th february of 2021.

“Kaithi” film released along with highly anticipated “Bigil” and performed extremely well in the box office despite of the star value of the Vijay starrer. Having no heroine, songs or flashback, “Kaithi” film impressed the audience for its strong and intense plot. Karthi who already chose to do performances oriented films such as “Aayirathil Oruvan”, “Paruthi Veeran”, “Theeran Athigaram Ondru”, excelled in “Kaithi” in his own way.

Kaithi revolves around a story of a released prisoner who spent 10 years of Jail sentence. On his way to meet his daughter for the first time, the protagonist was forced to help a senior police officer from deadly drug lords. The film reportedly collected 100 crores in the box office and it is currently streaming in Hotstar.

Ajay Devgn, one of the top actors in Bollywood is going to replace the role played by Karthi and rest of the cast and crew are yet to be announced. It is notable that Ajay acted in the remake of Malayalam blockbuster Drishyam as well. He also appeared in Singam remake. Being one of the most intense and influential actors of Hindi cinema, Ajay has won two National Film Awards and four Filmfare Awards.

Sharing this news in his official twitter account, S.R Prabhu, producer of Kaithi and co producer of the Hindi remake wrote “We are thrilled to announce that Ajay Devgn will be playing the lead in Reliance entertainment, Dream warrior Pictures and ADF Films Hindi remake of Kaithi. The film will release on February 12, 2021.” in his official twitter account.

We are thrilled to announce that @ajaydevgn will be playing the lead in @RelianceEnt @DreamWarriorPic and @ADFFilms Hindi remake of #Kaithi. The film will release on February 12, 2021.@Shibasishsarkar #SRPrakashbabu @Meena_Iyer

As soon as the news surfaced, various kind of reactions are pouring in the social media platforms. Though majority number of fans expressed their happiness on the film getting a remake, few expressed their disappointment as well. Check out some of their reactions below :

Flop , dhanush and Akshay Kumar will make sure you run from that date..

Previous articleFor The First Time, H.Raja Recommended A Tamil Film !!
Next articleTamil Actress Swathi Replied To Those Who Commented On Her Looks !!

Ravichandran Ashwin, popular cricketer of team India who belongs to Chennai is very well known for voicing for social causes. The cricketer today...

Fans Thrashing ICC For Choosing England As Venue For Finals !!

Fans who were eagerly waiting to witness the finals of the World Test Championship, got extremely disappointment after rain interrupted and washed out the...