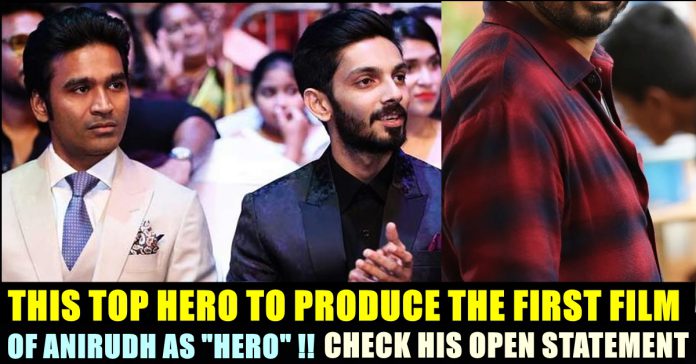 Music composer Anirudh Ravichander is pretty much active in social media platforms amidst this lockdown situation. He who been posting videos of himself playing piano, yesterday came up with a picture of himself to post on his official Instagram account where he enjoys more than 36 lakh followers. “A lil to the left.. to the right.. fix..” he wrote as his picture’s caption. In the picture Anirudh donned a tee and posed with a cooler on.

A lil to the left.. to the right.. fix.. Pc @kunaldaswani

This most from the happening music composer received 3 lakh likes within a day and many fans of him commented to express their love. The most interesting part is when a top emerging hero Sivakarthikeyan gave his word about producing the first film of Anirudh as hero. It is very well known that Sivakarthikeyan and Anirudh are sharing a strong friendship bond between them.

“Sirrrrr eppo naalum sari ennaki naalum sari.. neenga hero va nadikkira first Padam producer naan dhan 👍🙏😊 thank u sir ❤️” (Be it any day, I will be the one who is going to produce the first film of yours as hero) read the comment of Sivakarthikeyan.

Replying to this post Anirudh typed face mask emojis and punching emojis. Nelson Dilipkumar who directed Kolamavu Kokila and directing the next film of Sivakarthikeyan “Doctor” asked Anirudh to remember that he has already approached him to direct the film. To his comment, Anirudh replied by asking him to finish “Doctor” first.

Anirudh have made his onscreen appearance in several songs he composed and appeared in advertisements as lead as well. Followed by Vijay Antony and G.V Prakash, Anirudh is expected is make his onscreen debut soon and it has been officially confirmed that it is going to be produced by Sivakarthikeyan productions.

Anirudh became one of the sought after music composer of Kollywood in no time. Recently his work for Superstar Rajinikanth in Darbar was released and is being celebrated by Tamil cinema fans across the world. It is notable that he is currently working for Ulaganaayagan Kamal Haasan and for Thalapathy in Indian 2 and Thalapathy 64 respectively. It is notable that the musician already worked for Ajithkumar in Vethalam and Vivegam. On monday, it has been announced that Anirudh is going to compose music for the 60th film of Chiyaan Vikram which is going to be directed by Karthik Subbaraj. The film also going to feature Dhruv Vikram.