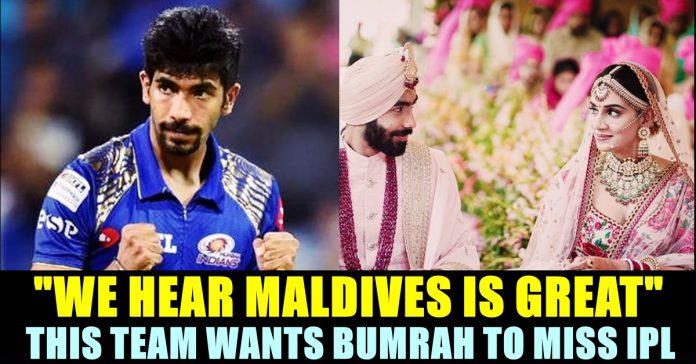 After Bumrah uploaded the pictures of his marriage ceremony with Sanjana Ganesan, the official twitter handle of Rajasthan Royals came up with a tweet suggesting Bumrah to start a honey moon trip to Maldives between April and May, the period which is known for IPL season. The twitter handle which rose to fame through its hilarious tweets, indirectly denoted that they wants Bumrah to miss the upcoming IPL tournament in order to make things easy to defeat the defending champions.

After so many rumours regarding the bride Bumrah was going to tie knot with, the cricketer himself came up with a social media post to confirm the identity of his life partner. He got married to Sanjana Ganesan, a sports presenter. Various reports emerged saying that Bumrah is going to get married to South Indian actress Anupama Parameshwaran and linked up Raashi Khanna with him as well.

Now, uploading his marriage pictures with Sanjana who has been covering IPL tournaments for a long time, Bumrah wrote “Love, if it finds you worthy, directs your course. Steered by love, we have begun a new journey together. Today is one of the happiest days of our lives and we feel blessed to be able to share the news of our wedding and our joy with you. Jasprit & Sanjana” as his caption.

Entire cricket fraternity came up with comments wishing the cricketer for the important decision he made in his life. “Congratulations sohne sardar 😍❤️ wishing you both happiness of lifetime” said former Indian batting all rounder Yuvraj Singh whereas Indian captain Virat Kohli commented “Congratulations and God bless you both. Much love 🙏😇💖” in his post.

Many other celebrities from various industries congratulated the couple through their posts in social media as well. Check out some of their wishes below :

Meanwhile, champions of the inaugural season of IPL tournament came up with a cheeky tweet suggesting the couple a honey moon trip during April to May. “Congratulations, guys! We hear Maldives is great in April – May” read the tweet of Rajasthan Royals which left the users of Twitter in splits.

We hear Maldives is great in April – May 😬 https://t.co/K3cBgz6cBS

The tweet which was posted with an intention to send Bumrah away during IPL season received hilarious reactions from the fans. “Don’t know about the team but your the most entertaining admin of the ipl franchise.” said a follower whereas another one said “Not to worry Admin… Rajasthan Royals already has great track record against MI.”

No matter which IPL team you support, there is only one GOAT admin and that is of Rajasthan Royals. 🤣🤣

Previous articleTotal Asset Values Of These Politicians Shocked Internet !!
Next article“Yes It Was Me” – Pavithra lakshmi Finally Opened On Her Saree Photoshoot !!

Chinmayi Accused Kamal Haasan After Seeing This Video Of Him !! WATCH

The craze for uploading adventurous videos on social media application TikTok seems to have claimed the life of a youth in Thanjavur. Tamil University Police...