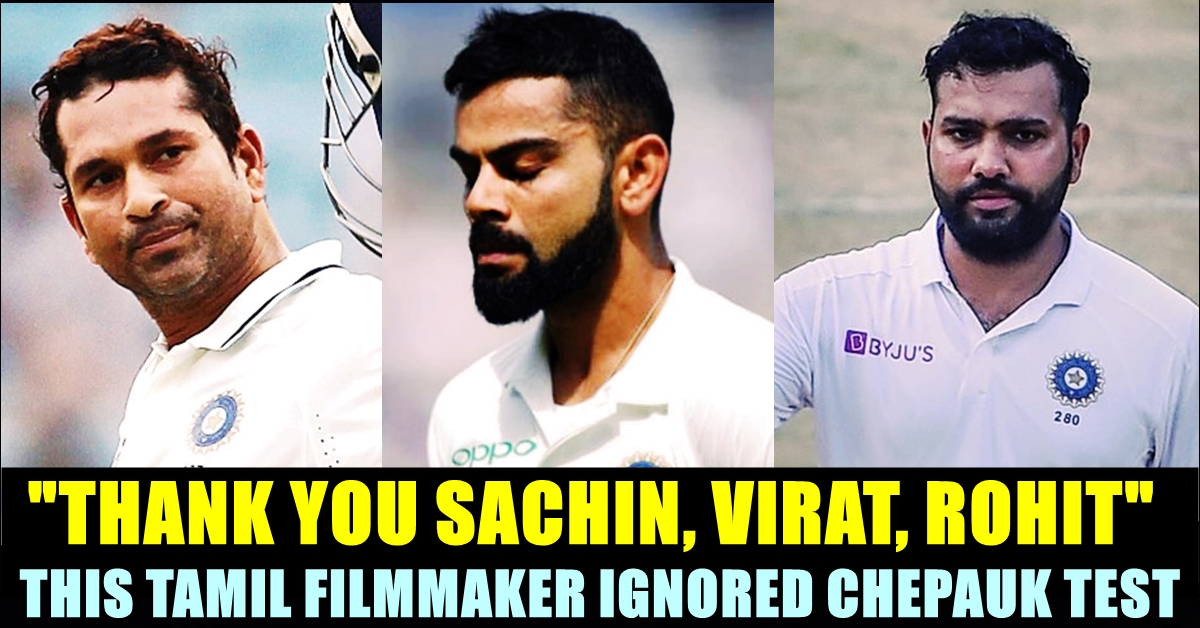 The first test match between India and England started on Chepauk Stadium of Chennai without spectators due to the COVID 19 lockdown. Cricket fans who were waiting to witness the epic rival after India’s outstanding performance against Australia in their home soil. They defeated the strongest side which had Smith, Warner, Starc, Cummins by 2-1 and surprised the fans of cricket across the world. Now, days after the feat, India is facing rival in Chennai.

However, the tweets uploaded by the prominent players of Team India on Wednesday, against the protest being conducted by the Farmers, visibly disappointed a number of ardent fans of cricket who are venting out their emotions in social media platforms. Director CS Amudhan, one of a keen follower of Indian cricket, uploaded a tweet saying that he is going to miss the test match at Chepauk for the tweets posted by players such as Indian cricketer Virat Kohli, former legendary batsman Sachin Tendulkar, Rohit sharma and former Indian captain Anil Kumble.

Countering the support of International celebrities for the protesting farmers, Sachin Tendulkar said that Indians should decide for India and spectators won’t participate. Virat Kohli, Rohit Sharma and Anil Kumble insisted on “India together” and seeked amicable solution.

India’s sovereignty cannot be compromised. External forces can be spectators but not participants.
Indians know India and should decide for India. Let's remain united as a nation.#IndiaTogether #IndiaAgainstPropaganda

Let us all stay united in this hour of disagreements. Farmers are an integral part of our country and I'm sure an amicable solution will be found between all parties to bring about peace and move forward together. #IndiaTogether

India has always been stronger when we all stand together and finding a solution is the need of the hour. Our farmers play an important role in our nation’s well being and I am sure everyone will play their roles to find a solution TOGETHER. #IndiaTogether 🇮🇳

As the world's largest democracy, India is more than capable of taking her internal issues to amicable solutions. Onwards and upwards. #IndiaTogether#IndiaAgainstPropaganda

Director Amudhan who is known for making the only parody film in Tamil film industry, in his tweet, said that he never missed a test match at Chepauk since the tied-test which took place in the year 1986. The filmmaker said that he never thought that the day would come when he cared nothing for a test series and sarcastically thanked Anil Kumble, Virat Kohli, Sachin and Rohit.

“Starting with the tied-test I’ve never missed a test match at Chepauk. In context of people struggling for their livelihoods this is nothing but I never thought the day would come when I cared nothing for a Test series. Thank you Sachin, Virat, Rohit, Kumble” read the tweet of Amudhan.

Starting with the tied-test I’ve never missed a test match at Chepauk. In context of people struggling for their livelihoods this is nothing but I never thought the day would come when I cared nothing for a Test series. Thank you @sachin_rt @imVkohli @ImRo45 @anilkumble1074

Both the things has no connection ! Anyway we aren't supporting them off the field .

Did anyone care about you.. Cricket lovers don't care anything negative about them

I’ve never felt so much pain in a long time as seeing SRT’s tweet. I do understand they’re merely humans with lot at stake. A Muscle and Money Powered Government which has ways to get back on you at any extend and any expense. Still a broken mirror can never be glued again.