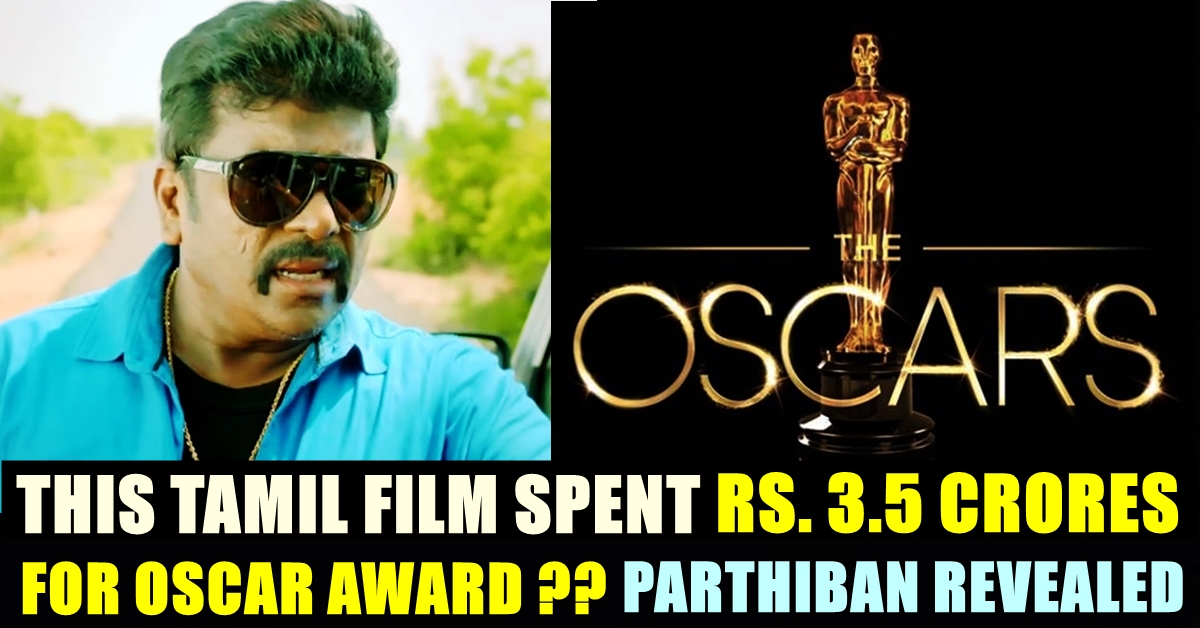 An old reply made by actor Parthiban to one of his followers regarding the process of Oscar nomination, is doing rounds in social media platforms as Suriya’s “Soorarai Pottru” recently made headlines for entering the Oscar race officially. The “Oththa Seruppu Size 7” maker has said that “Visaranai” team spent Rs.3.5 crores while trying to get nomination in the Oscars. “Visaranai” is a 2015 film directed by Vettri Maaran based on the novel lock up and the film depicted how custodial tortures in Police stations are taking place in our country. It also detailed about how Police stations are functioning in Tamil nadu.

The news on Soorarai Pottru’s entry into “Oscar” race made fans of Tamil cinema extremely happy. They trended various kind of hashtags in the micro blogging social media site and even some of the celebrities felt proud on knowing about the film’s achievement. Amidst the celebration, people in social media also started talking about other Tamil films which deserves to get the highest recognition.

The “Oscars”, popularly known as The Academy Awards, are made for artistic and technical merit in the film industry. They are regarded as the most famous and prestigious awards in the entertainment industry across the globe. As of 2021, 11 Indians have been nominated for a total of 14 Oscars, six of whom have won seven Oscars. Satyajith Ray, A.R Rahman, Rassol Pookutty are some of the main names that garnered the Oscar recognition till date.

Most recently, makers of “Soorarai Pottru” enrolled themselves in the race of upcoming Academy awards. Suriya who played the lead role in the film, also produced the film under his own banner “2D entertainments”. On 26th of January, Actor Suryia’s “Soorarai Pottru” officially joined the race of Oscars. Rajasekar Sundarapandiyan, co-producer of the movie said “Our team is confident that the film will impress upon Oscar Jury members as how it has impressed millions of film lovers across the globe” while talking to the media.

It is notable that actor/director Parthipan’s experimental venture “Oththa Seruppu” grabbed a spot in the Oscar’s eligible list last year. However, the film failed to get nomination. At that time, a fan wished him the best and Parthiban said that he couldn’t spend money for the process of getting nominated for the Oscars.

Another follower asked him whether one have to spend money to get Oscar. Replying to him, Parthiban said “Inquire about it. For “Visaranai”, they spent 3. 5 crores. That kind of campaigning would get us to the nomination at least” by writing “விசாரிச்சு பாருங்க , விசாரனைக்கே 3 1/2 கோடி செலவு செஞ்சாங்க. அப்படி Campaign பண்ணாதான் Nomination ஆவது கிடைக்கும்”

However, Soorarai Pottru’s strong content that depicts the cultural significance of our country with enough emotions and drama, deserves the recognition and that is something we Tamil cinema fans should be proud of.

Director Indirectly Criticized Lokesh Kanagaraj After Watching “Master” In Prime !!
Mia Khalifa’s Heart Winning Reply To A Girl Who Wished For A Physique Similar To Her !!